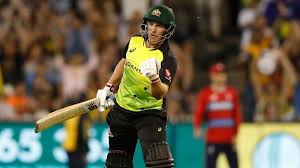 MELBOURNE (Reuters) - Top order batsman Aaron Finch has been confirmed as Australia’s captain for the three-match Twenty20 series against Pakistan in the United Arab Emirates later this month.
The captaincy completes a superb week for the aggressive right hander, who is in line to make his test debut against Pakistan in Dubai on Sunday after coach Justin Langer said he was a certainty to play. The 31-year-old Finch has previously captained the side in Twenty20 internationals but was replaced in 2016 as Australia consolidated Steve Smith’s leadership across all three formats. Smith is currently serving a 12-month suspension for his role in a ball tampering scandal during a test match against South Africa. All-rounder Mitch Marsh and wicketkeeper Alex Carey will serve as Finch’s vice-captains. “Aaron has already captained Australia in the recent T20s we played in Zimbabwe, and I’ve been extremely impressed with his impact on the test squad over here in the UAE,” Langer said in a statement on Friday. “We know he’s an exceptional player, and he’s arguably the most in form T20 player in the world at the moment.” Aggressive top-order batsman Chris Lynn has also returned to the side after recovering from a shoulder injury. “Chris Lynn has responded well from his shoulder injury and was professional during his rehabilitation,” Langer added. “He’s had an outstanding campaign in (domestic one day cricket) to date and reminded us how explosive and powerful a cricketer he can be.” The first Twenty20 international is in Abu Dhabi on Oct. 24, with the second and third games in Dubai on Oct. 26 and 28. Squad: Aaron Finch (captain), Mitch Marsh, Alex Carey, Ashton Agar, Nathan Coulter-Nile, Chris Lynn, Nathan Lyon, Glenn Maxwell, Ben McDermott, Darcy Short, Billy Stanlake, Mitch Starc, Andrew Tye, Adam Zampa.

Reporting by Greg Stutchbury in Wellington; Editing by John O'Bri