LAHORE (92 News) – Condemning Lawyers attack on Punjab Institute of Cardiology (PIC), Special Assistant to Prime Minister on Information Fidous Ashiq Awan on Wednesday regretted and denounced the manhandling of Punjab Information Minister by the lawyers. In a statement, the special assistant also mentioned that perpetrators would be brought to justice. “The lawyers will have to obey the law but they disrespected their professional values,” she said. “Manhandling and besieging doctors, patients and their attendants is condemnable,” she added. Firdous Ashiq Awan condemned the manhandling of Chohan by the enraged lawyers, adding that everyone knows elections were behind lawyers attack. She also assured that the perpetrators would be brought to justice at all cost. “Even during the war, the opponent protects hospitals for the protection of human rights,” she said. “Who allowed them to turn a cardiac hospital into wrestling ground,” the special assistant further maintained. Earlier, lawyers stormed and ransacked PIC in protest against doctors. The protesters forcibly entered PIC where a heavy contingent of the police was already present. They also beat up the media persons and stopped from covering the event. They also entered the ICU. During the protest, Gulshan Bibi, 70, who was being treated at PIC died after doctors and staffers vacated the hospital. All the operations were halted after the incident. 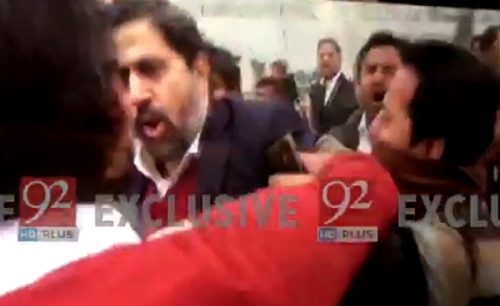 After the attack, doctors, staffers and patients came out of the hospital. Lawyers also resorted to aerial firing outside the hospital. They also tortured Punjab Minister for Information Fayyazul Hassan Chohan. The violent protesters also set a police van on fire. Owing to the protest, emergency of the Services Hospital was also closed. On the other hand, doctors besieged Punjab Health Minister Yasmin Rashid when she reached PIC to look into the matter. The Grand Health Alliance (GHA) demanded the resignation of Dr Yasmin Rashid. Meanwhile, PFUJ president Shahzad Butt and secretary general Rana Azeem have condemned the torture of media persons by the lawyers. During a press conference on Tuesday night, doctors had apologized for second time. Prime Minister Imran Khan has also taken notice of the PIC incident and sought a report from the IGP Punjab and chief secretary. Chief Minister Sardar Usman Buzdar has taken notice of the incident and ordered an inquiry into the matter. He has formed an inquiry committee to probe the matter. The committee will comprise of Punjab Health Minister Dr Yasmin Rashid, IGP Punjab Shoaib Dastgir, Home additional chief secretary and Specialized Health and Medical Education secretary. The committee will prepare a report and submit a report to the chief minister. It will also determine involved in hooliganism.