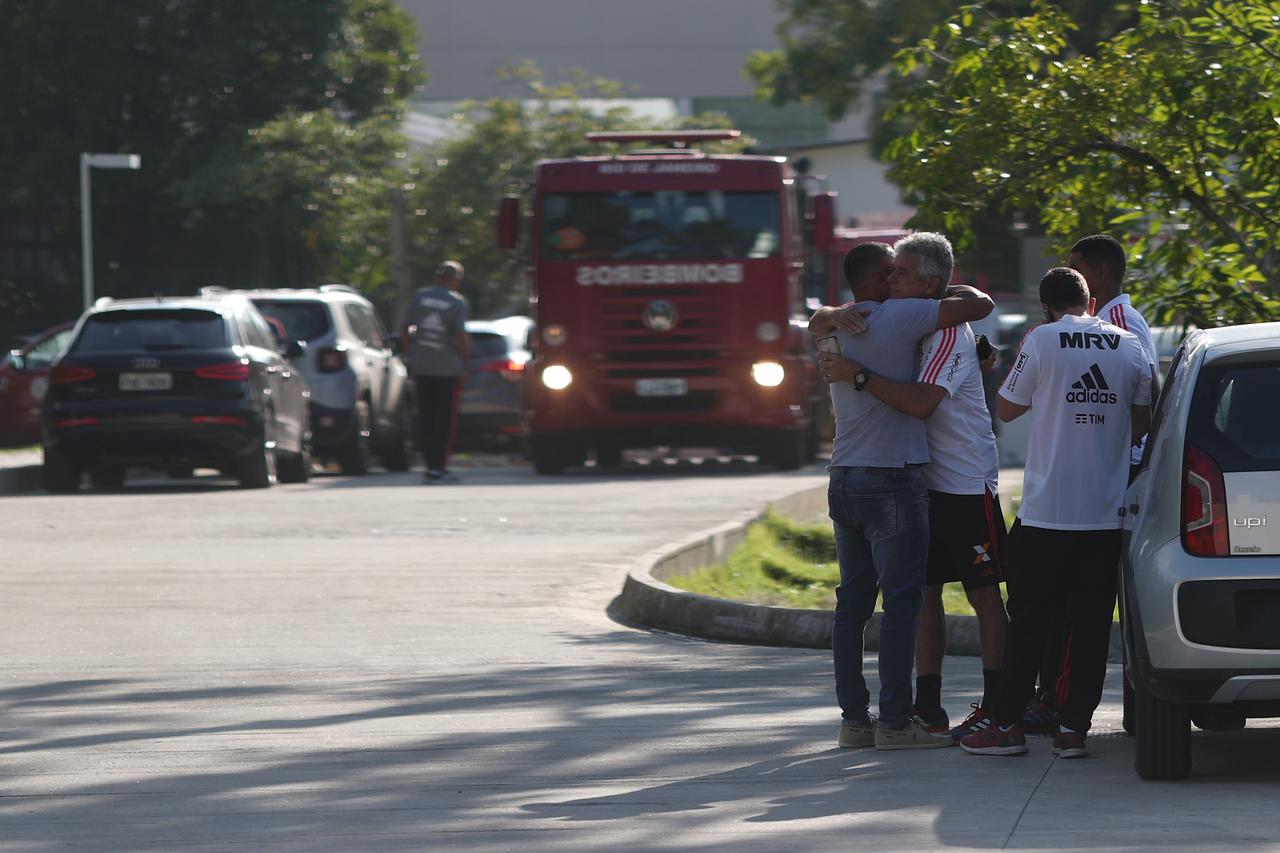 RIO DE JANEIRO (Reuters) - A fire at the training centre of Rio de Janeiro soccer club Flamengo killed 10 people and injured at least three others on Friday, one of them seriously, firefighters and news reports said. The fire broke out in the early hours of the morning at the Ninho do Urubu, a state-of-the-art training centre that was expanded and opened only two months ago. The facility has accommodation for teenage players. “The kids from the Flamengo youth team were sleeping there at the time,” firefighter Douglas Henaut told Globo News. Globo’s news site reported that youth players were among the dead, although it did not cite its sources. The three injured were 14- and 15-years-old, according to the site. All three were taken to hospital, one of them reportedly in a serious condition. Ariel footage showed corrugated iron roofs distorted by the fire and piles of charred items. Nearby trees were also scorched by the flames. After years of financial difficulties, Flamengo last year spent 23 million reais ($6.2 million) to expand the Ninho do Urubu facilities. In addition to accommodation for young players, the facilities include several pitches, an aquatic park, a gym, a medical centre and a mini stadium. The Ninho do Urubu, or Vulture’s Nest, is so called because the club’s symbol is a vulture. Vinicius Junior, the teenage Real Madrid forward who trained at the facility before joining for the Spanish giants last year, tweeted his condolences. “What sad News! Praying for everyone! Strength, strength, strength,” he wrote. The fire follows days of heavy rains that hit the city and claimed at least six lives. Flamengo, the alma mater of players such as Zico, Junior and Leonardo, is one of the best-supported clubs in Brazil and is famous around the world. Known by fans as the Red-and-Black, they won the Copa Libertadores, South America’s version of the Champions League, in 1981 and lifted the Intercontinental Cup a few months later. Zico, who is outside Brazil, wrote on Instagram: “What a shock getting this news here on the other side of the world,” the former Brazil midfielder wrote. “May the Red-and-Black nation have strength and faith to get through this moment.” Flamengo made no official statement other than to tweet that it was in mourning. But rival teams across Brazil, including fellow Rio sides Botafogo, Fluminense and Vasco da Gama, tweeted their solidarity. The tragedy came a day before the side were due to play arch rivals Fluminense at the Maracana stadium. The derby match is now expected to be postponed. One of Flamengo’s most high-profile fans, the country’s vice-president, also expressed his condolences. “As a fan and sportsman I stand in solidarity with the families, the club and the Red-and-Black nation,” General Hamilton Mourao wrote on twitter. “May God comfort all.”