ISLAMABAD (92 News) – A fire erupted in a bathroom on the third floor of Prime Minister (PM) Secretariat Islamabad was put out through immediate response on Monday (today). Speaking to the journalists, Prime Minister’s Special Assistant on Media Affairs Yousaf Baig Mirza said no loss or damage has been reported. He said the cause of the fire is being ascertained. According to the Prime Minister office, the fire probably was triggered by the short circuit. However, no person got injured in the incident. All documents also remained safe. All PM House staff members remained safe during the fire, the spokesperson stated. The PM Office was evacuated following the incident. Prime Minister Imran Khan was holding a meeting inside the building when the fire erupted. 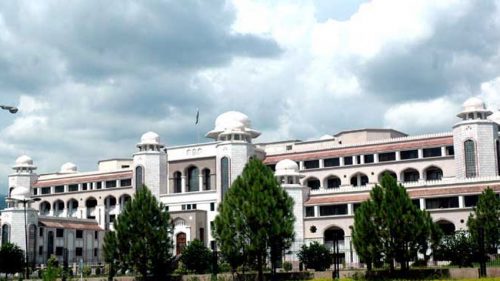 It was reported that PM Khan continued his meeting despite reports of the fire and when the premier was informed again about the fire, he said that first the staff be evacuated and then he will leave. On the other hand, two fire tenders of Pakistan Navy also participated to extinguish the fire at Prime Minister's office.

Earlier today, Commander US CENTCOM Gen Kenneth Mackenzie called on PM Imran Khan at PM House.  They discussed matters of mutual interest, including regional situation. During the meeting, Afghanistan issue and escalating tensions between India and Pakistan were also discussed. The US commander appreciated Pakistan’s efforts in war against terrorism. Defense Minister Pervez Khattak and Secretary Foreign Affairs Tehmina Janjua were also present on the occasion. It is to be mentioned here that US CENTCOM Commander General Kenneth F McKenzie was in Pakistan on a two-day visit during which he held meeting with Naval Chief Admiral Zafar Mahmood Abbasi at the Naval Headquarters and deliberated on the matters pertaining to maritime security. The Naval Chief apprised the US commander about the steps taken by Pakistan Navy to curb maritime terrorism and piracy. General McKenzie assured to provide possible cooperation for regional peace and stability.