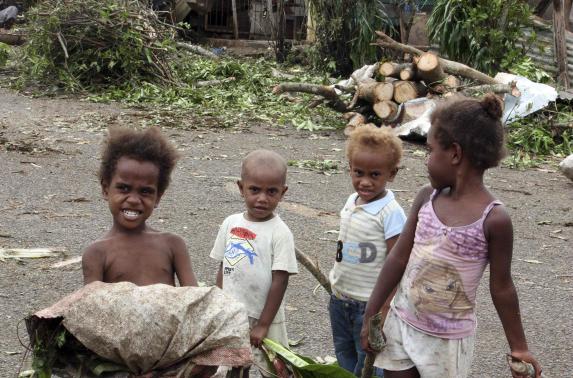 SYDNEY - The first aid teams to reach Vanuatu reported widespread devastation on Sunday as authorities declared a state of emergency after a "monster" cyclone tore through the vulnerable Pacific island nation. With winds of more than 300 kph (185 mph), Cyclone Pam razed homes, smashed boats and washed away roads and bridges as it struck late on Friday and into Saturday. Aid workers described the situation as catastrophic. The count of confirmed deaths was at eight with 30 people injured. But those numbers were almost certain to rise as rescuers reached the low-lying archipelago's outlying islands. Aid workers were particularly worried about the southern island of Tanna. An official with the Australian Red Cross told Reuters an aircraft had managed to land there and confirmed "widespread destruction". "Virtually every building that is not concrete has been flattened," said the official, adding two deaths had been confirmed on the island which has a population of about 29,000 and is about 200 km (125 miles) south of the capital, Port Vila. Witnesses in Port Vila described sea surges of up to eight meters (26 feet) and widespread flooding as the category 5 cyclone hit. Residents said the storm sounded like a freight train. Port Vila was strewn with debris and looked as if a bomb had gone off. President Baldwin Lonsdale, who happened to be at a disaster risk conference in Japan, likened the storm to a monster. "Most of the houses in Vila ... have been damaged and destroyed. People are finding shelter where they can live for the night," he told the Thomson Reuters Foundation. He said the impact would be "the very, very, very worst" in isolated outer islands but held out hope the number of casualties would be "minor". He said offers of aid had been "very magnanimous". "We are not begging, but we are asking for assistance." Vanuatu's climate change minister, James Bule, said people were used to storms, though not usually such strong ones, and he also hoped loss of life might be limited. "We have people aware of what to do," Bule said. Formerly known as the New Hebrides, Vanuatu is sprawling cluster of 83 islands and 260,000 people, 2,000 km (1,250 miles) northeast of the Australian city of Brisbane. It is among the world's poorest countries and highly prone to disasters such as earthquakes, tsunamis and storms. Aid officials said the storm was comparable in strength to Typhoon Haiyan, which hit the Philippines in 2013 and killed more than 6,000 people, and looked set to be one of the worst natural disasters the Pacific region has ever experienced. Kris Paraskevas, a consultant in Port Vila, said the situation was catastrophic. "The villages are no good. Many houses were just poles and tin or thatch. There's nothing left, people are just sitting in rubble," Paraskevas said. FIRST FLIGHT Aid flights, including a New Zealand military Hercules aircraft carrying eight tonnes of supplies and an initial team, landed on Sunday as Port Vila's airport partially reopened. Australia sent two military aircraft including one with medical experts, search and rescue teams and emergency supplies, while a UN team was also preparing to go in with members drawn from as far away as Europe. Oxfam's country manager Colin Collett van Rooyen said Vanuatu's outlying islands were particularly vulnerable. "We are talking about islands that are remote and really small, with none of what we would call modern infrastructure,” he said. "We anticipate that that will go higher," he said, referring to the confirmed death toll of eight. Australia promised A$5 million in aid, New Zealand NZ$2.5 million while Britain, which jointly ruled Vanuatu with France until independence in 1980, has offered up to two million pounds ($2.95 million) in assistance. The World Bank said it was exploring a swift insurance payout to the government. "We will also be deploying humanitarian supplies to provide support for up to 5,000 people in the form of water, sanitation and shelter," Australian Foreign Minister Julie Bishop told reporters in Perth. Aurelia Balpe, regional head of the International Federation of Red Cross and Red Crescent Societies, told Reuters Vanuatu's medical system was poorly equipped to handle such a disaster. "The country mostly relies on first aid posts and the supplies in the clinics are probably just antibiotics and pain relief." Late on Sunday, Pam had weakened as it moved to the southeast, and New Zealand's northern regions were starting to feel its effects. Authorities there were warning the public to prepare for damaging winds, heavy rain and big seas. - Reuters