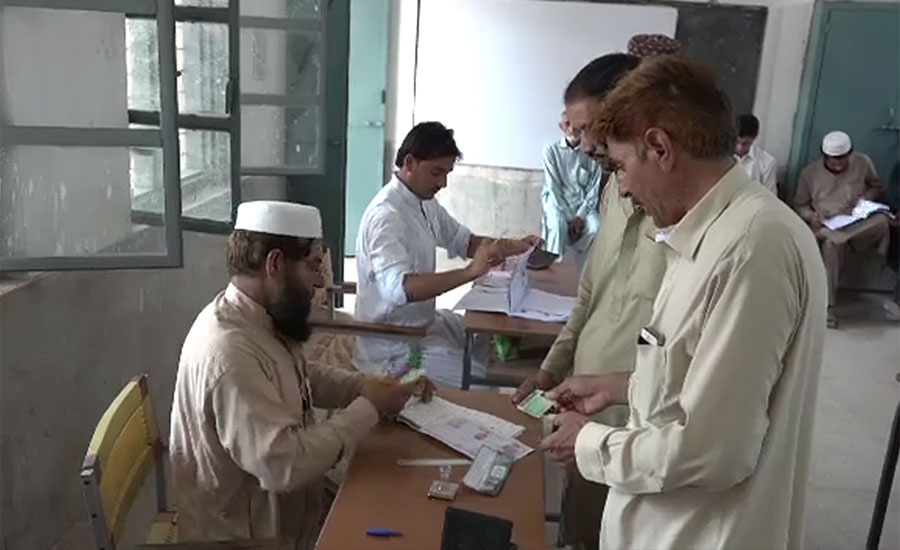 ISLAMABAD (92 News) - The vote cast for first-ever elections for in seven tribal districts of Khyber Pakhtunkhawa (KP) is continuing amid tight security and a couple of scuffles reported outside polling stations today. The polls ate taking place for 16 seats of KP's provincial assembly amid tight security and up to 2.8 million voters will use their right to vote. Activists of two independent candidates clashed with each other outside Girls High School in Landi Kotal. Security forces intervened into the matter. According to the control room of the Election Commission of Pakistan (ECP), no violence has been reported so far. The long queue of voters including women was seen after a large number of people came out of their houses to cast their vote. Several political parties including Pakistan Tehreek-i-Insaaf (PTI) and dozens of independent candidates, a good number of them are young people, are contesting elections that will attain the status of history in the tribal belt of KP. https://twitter.com/TomDrewUK/status/1152468130565971968 British Higher Commissioner to Pakistan Thomas Drew has expressed his best wishes to the people belonging to newly-merged districts (formerly FATA) of KP. Earlier, the ECP distributed ballot boxes and election-related material in all polling stations and deputed poll staff. As many 554 polling stations have been declared very sensitive for security point of view. According to the Provincial Election Commission, polling is continuing at 1,896 polling stations from 8am to 5pm without any break. As many 285 candidates including two women are in run, 83 candidates are contesting election from the platform of different political parties while 201 are independents. Tight security measures have been taken to ensure holding of the polling in a peaceful and transparent manner. Besides local police, army troops have also been deployed in polling stations to help the administration in maintaining peaceful atmosphere in the elections. Seven tribal districts including Orkazai, Bajur and South Waziristan and Frontier region were merged into KP under the 25th Constitutional Amendment. https://www.youtube.com/watch?v=NvIokkRJwyk