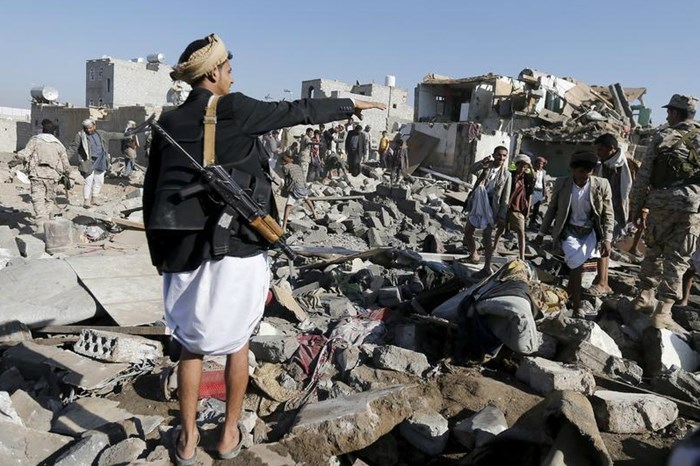 GENEVA - The first two planeloads of medical aid for Yemen landed in the capital Sanaa on Friday after weeks of conflict which have killed 600 people and displaced 100,000 others, and the United Nations appealed for a pause in fighting to allow more aid in. UN officials and aid workers say that the fighting is pushing the country of 25 million people, one of the poorest in the Arab world, towards a humanitarian catastrophe. Food imports are choked off, fuel is scarce, cash handouts to the poorest third of the population are suspended and many parts of the southern city of Aden - scene of heavy street clashes - have been without water or electricity. More than 2,200 people have been wounded by the combat in Yemen, which pits Houthi forces and their army allies against southern militias backed by more than two weeks of Saudi-led air strikes. Hospitals in Aden are unable to cope, aid workers say. The International Committee of the Red Cross (ICRC) and the United Nations Children's Fund (UNICEF) said they finally landed two planes in Sanaa on Friday carrying more than 30 tonnes of medical equipment, after days of delay. Their arrival came two days after two boatloads of emergency medical aid and teams of surgeons from the ICRC and Medecins Sans Frontieres docked in Aden, a city of 1 million people which an ICRC spokeswoman said was on the verge of catastrophe. UN Humanitarian Coordinator for Yemen Johannes van der Klauwe said much more aid was needed and called for a pause in hostilities - even on a daily basis - to allow for it to be delivered. "We got the first flights in, but we need many more flights coming in, many more boats," he said in Geneva. "In order to make this effective we need space. This (humanitarian) pause, every day the air space cleared for aid flights coming in and out," van der Klauwe said. "Alone in Aden, 1 million people risk being cut off from access to clean water within a matter of days unless additional fuel is brought in." "UNPRECEDENTED RISK" Aid workers have said there is a risk of malnutrition and disease in a country which was already poorer and more vulnerable than other Arab states being torn apart by conflict. Yemen has only modest oil resources next to Libya and Iraq, and a very weak national government compared to pre-crisis Syria, meaning the state could offer barely any support to a population facing crisis. Van der Klauwe said 16 million people, nearly two thirds of the population, needed humanitarian assistance before the start of the crisis, which he said was now affecting 15 out of Yemen's 22 governorates. "The basic services which were already threadbare are now at risk of collapsing ... What we are experiencing now is unprecedented in the modern history of the country," he said. Many countries have been airlifting their nationals out of Yemen, or sending boats to pick them up. Yemenis trapped by the conflict have fewer options, leading some to risk the perilous Red Sea crossing to Djibouti and Somaliland. The UN refugee agency UNHCR said around 900 refugees fled by boat in the last 10 days to countries in the Horn of Africa. - Reuters