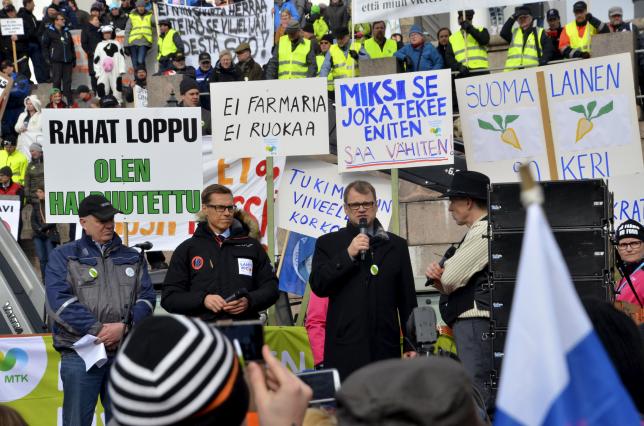 HELSINKI - If one fist bump could endanger Finland's increasingly stressed tradition of consensus politics, then Prime Minister Juha Sipila and a cabinet colleague may just have achieved this dubious distinction. In a nod to popular culture, a smiling Sipila and his finance minister Alexander Stubb punched each other's fist to celebrate a breakthrough in negotiating one of Finland's toughest austerity deals in decades with trade unions. The unions, whose members face de facto wage cuts in the name of reviving economic growth, were deeply unimpressed by the public show of exuberance earlier this month. "Members were very upset. They thought that they were mocking workers, saying something like: 'now we can drive them into the ground'," said PAM union leader Ann Selin, who represents 232,000 workers. The fist bump wasn't a first in international politics. Barack and Michelle Obama exchanged one at the Democratic party convention before his election to the U.S. presidency in 2008. But Sipila and Stubb are hardly the golden couple of Finnish politics. Before becoming prime minister, Sipila was a millionaire businessman while Stubb has the image of a jet setter with a liking for fine suits. This made the gesture all the more difficult to stomach for union leaders after what was only a preliminary deal, with a detailed agreement still to be hammered out in the coming months. "It did not help at all," said Selin. Unions were outraged at politicians who appeared out of touch, underlying the fragility of the Nordic model under which parties of the centre-right and centre-left, organised labour and business strive to reach consensus deals without conflict. The danger is that the preliminary accord may still collapse as the Finnish consensus is tested by rising debt, unemployment and lengthy economic stagnation. Relying on traditional consensus politics, Sipila wants to persuade the unions to cut labour costs by 5 percent. It is part of his push to raise the competitiveness of the Finnish economy after three years of recession with some of the deepest austerity and welfare since World War Two. With unemployment at 9.4 percent, Stubb insists the fist bump was to celebrate the new jobs that he believes the reforms will create. He has heralded a Finnish spring of "three big decisions that need to be taken to change the course of the country" - the labour deal, a parliamentary vote on budget cuts and reforms to cut the cost of health care. -Reuters