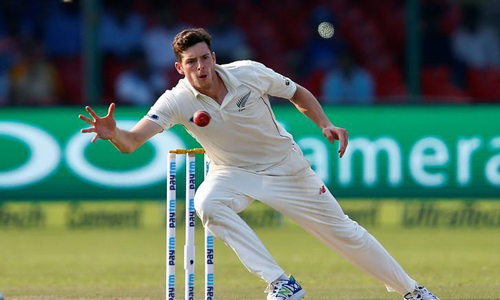 HAMILTON- Spin-bowling all-rounder Mitchell Santner has been included in New Zealand's squad for the second and final test against Pakistan after making a quick recovery from a broken wrist. The 24-year-old left-armer missed New Zealand's eight-wicket win in the series-opener in Christchurch last week, after he was struck on his right wrist by a ball during training with Northern Districts three weeks ago. Santner replaces all-rounder Jimmy Neesham, who heads back to domestic cricket, and adds another slow bowling option with leg-spinner Todd Astle for the match in Hamilton starting on Friday. "With him and Todd in the team, it gives us the opportunity to play two spinners if required," selector Gavin Larsen said in a media release on Monday. Northern Districts batsman Dean Brownlie, who played the last of his 14 tests away to England three years ago, also joins the squad as cover for batsman Ross Taylor. Taylor did not bat in the second innings in Christchurch and is a doubt for the match at Seddon Park pending an examination on his left eye by a specialist. Coach Mike Hesson said on Sunday that Taylor had a problem with vision out of the eye for about a year and a test on the opening day in Christchurch showed it may have deteriorated "quicker" than hoped. Larsen said the team were awaiting further information on Taylor's condition before deciding on his availability. "We should know more in the next couple of days," he said. -Reuters