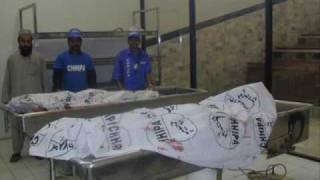 KARACHI (92 News) – Four bullet-riddled bodies were found from Issa Nagari area and one from Korangi on Thursday morning. As per reports, two bodies were discovered near the Layari Expressway and another two in the precincts. One was discovered from the Korangi area. All of the deceased have torture marks on their bodies. Police said all of the dead had been shot after being tortured. “The identity of the deceased has not been confirmed yet,” DSP Nasir Lodhi said while talking to 92 News.