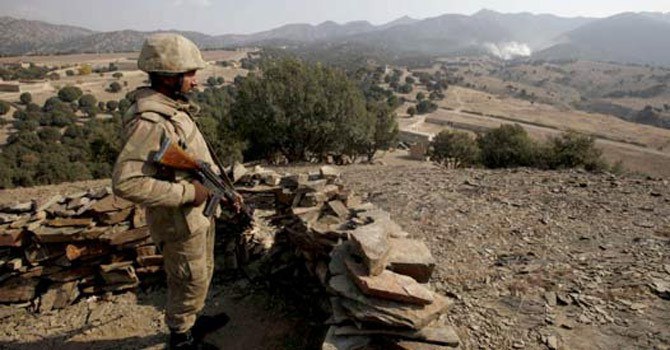 DATTA KHEL (92 News) – As many as five militants and one security personnel were killed on Saturday morning in an attack at the security forces check post in Datta Khel area of North Waziristan Agency. According to the reports, the incident took place when a group of around 20 militants attacked an army check-post with automatic weapons, hand-grenades and rockets, killing one security personnel who was standing guard outside the check post. In retaliatory fire, the security forces killed five of the assailants while others managed to run away. The security forces have launched a search operation in the area to track down the attackers. No group has claimed responsibility for the attack yet. North Waziristan, the restive tribal region bordering Afghanistan, was considered as the stronghold of Pakistani Taliban and other militants groups before Pakistan army launched operation Zarb-e-Azb in the region. According to Inter Services Public Relations (ISPR), more than 3,200 militants have been killed so far in the military operation that was launched on June 15, 2014 against foreign and local terrorist hidings in North Waziristan.