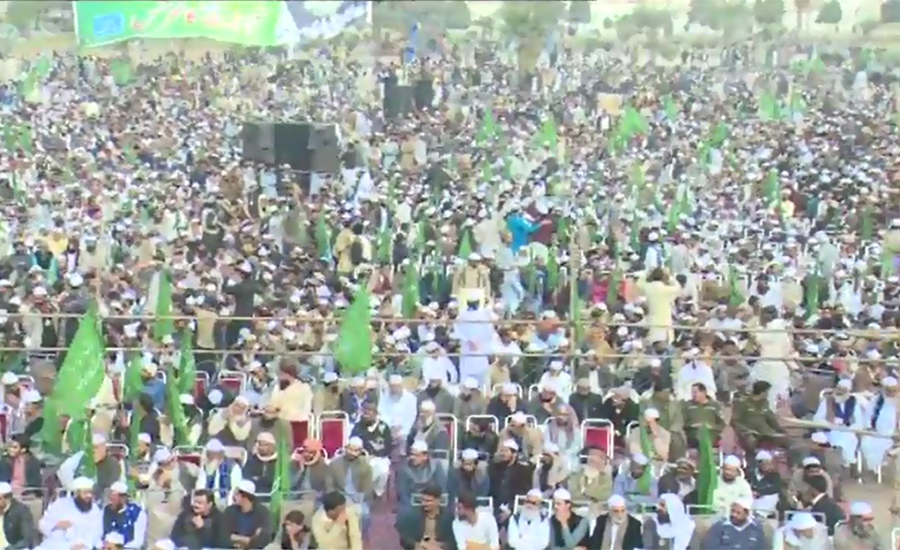 FAISALABAD (92 News) – At least five lawmakers of ruling Pakistan Muslim League-Nawaz (PML-N) have announced their resignations from public office as hundreds of thousands of people gathered in Faisalabad’s Dhobi Ghaat Ground on Sunday in a show of unity with the religious clerics on the occasion of Khatm-e-Nabuwwat Conference. The Khatm-e-Nabuwwat conference was organised by Pir Sialvi in Faisalabad. The conference was called to push for the resignation of Punjab Law minister Rana Sanaullah over his stance on the finality of Prophethood (PBUH). Pir Hamidu Din Sialvi, Dr Muhammad Asharf Jalali, Sahibzada Hamid Raza and Pir of Tunsa Sharif and other Ulema across the country participated in the conference. Five PML-N lawmakers including three members of provincial assembly (MPAs) and two Members of National Assembly (MNAs) gave the power to Pir Sialvi to decide their political future. Dr Nisar Ahmad Jutt and Ghulam Bibi Bharwana, Maulana Rehmatullah, Pir Hameeduddin Sialvi’s son Nizam-ud-Din Sialvi, and Khan Muhammad Baloch were among the people who announced their resignations. They also announced to quit the party today. On the other hand, a large number of Union Council chairmen from Faisalabad and Jhang also participated in the conference and gave the power to Pir Sialvi to decide their political future. Earlier, Pir Hameeduddin Sialvi had denied the impression that he entered in any deal with government to withdraw the demand of Punjab Law Minister Rana Sanaullah’s resignation. He said that the demand of the Punjab law minister’s resignation cannot be withdrawn.