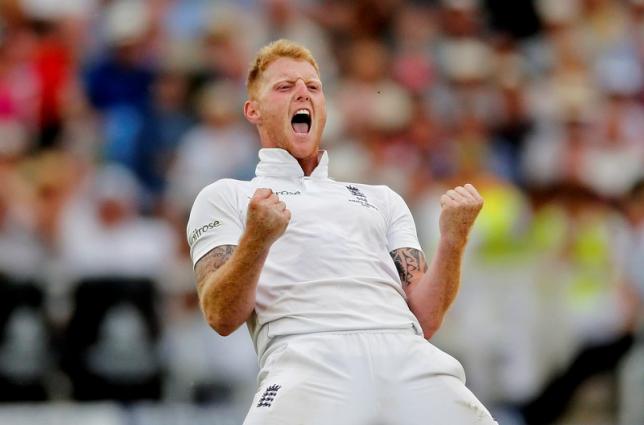 NOTTINGHAM – Ben Stokes took five wickets to put England on the verge of a famous victory that would win back the Ashes as Australia finished on 241 for seven after a compelling second day of the fourth Test at Trent Bridge on Friday. The touring side, bowled out for 60 on the first morning of the match, fought back to trail by 90 runs but England should finish them off on the third day to clinch the series. Adam Voges was 48 not out with Mitchell Starc on nought at the close. Australia took five wickets in the morning before England declared on 391 for nine and the touring side's openers, Chris Rogers and David Warner, added 113 runs to give their side a foothold in the match. The pair batted through most of the afternoon session before Stokes inspired England to take four wickets and end the Australia fightback. Stokes dismissed Rogers for 52, Warner for 64 and Shaun Marsh for two before taking a brilliant catch off Broad's bowling to send back Steven Smith for five and leave Australia reeling at 138 for four at tea. England removed Michael Clarke (13), Peter Nevill (17) and Mitchell Johnson (five) in a tense final session. Starc led the Australian fightback in the morning, claiming test-best figures of 6-111. The tall left-armer dismissed Joe Root for 130, Mark Wood for 28 and Jos Buttler for 12. Josh Hazlewood snared Stokes for five and Johnson removed Moeen Ali for 38 thanks to a superb catch by Smith, only a fine ninth-wicket partnership of 58 between Moeen and Broad saving England from complete collapse. Warner, on 10, was badly dropped by Cook at first slip off Broad and Ian Bell spilled a harder chance off Stokes. Rogers, caught by Root off Wood on 47, was reprieved when television replays showed the bowler had over-stepped the crease but five runs later he was brilliantly taken by Root. Warner skied Stokes to Broad at wide mid-on, Marsh edged the right-armer to Root at third slip and Smith flayed Broad to cover point where Stokes held a fine low catch. Clarke scratched around gamely for 13 runs in nearly an hour but he never looked comfortable and edged Wood into the slips where Cook juggled the ball before knocking it up for Ian Bell to pouch it. Voges and Nevill added 50 for the sixth wicket, Nevill surviving after being caught by Cook off a Finn no ball. But he fell in the final session, trapped lbw by Stokes as he tried to leave a rapid inswinger and Johnson edged Stokes to Cook before bad light ended the day's play. –Reuters