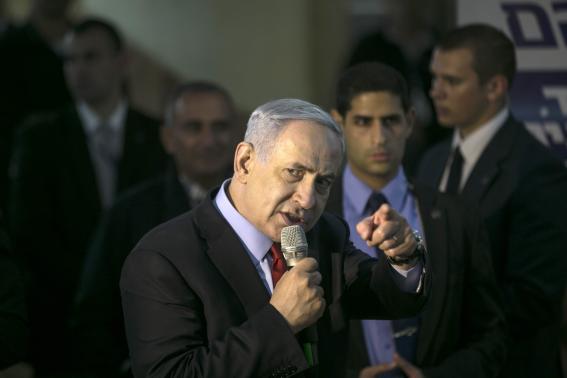 JERUSALEM - Flagging in opinion polls before Tuesday's election, Prime Minister Benjamin Netanyahu is trying to rally Israeli rightists by casting his centre-left challengers as tools of a global campaign to usurp power. Over social media and broadcast interviews, the three-term leader has accused unspecified foreign governments and tycoons of funneling "tens of millions of dollars" to opposition activists working to undermine his Likud party and boost the Zionist Union joint list led by Isaac Herzog and Tzipi Livni. "Right-wing rule is in danger. Leftist elements and the media in this country and abroad have joined forces to illegitimately bring Tzipi and Bougie (Herzog) to power," Netanyahu said on Facebook on Friday. The Zionist Union dismissed the rhetorical fusillade as a bid by Netanyahu to shift voters' attention from socio-economic problems to security challenges like the Palestinians' drive for statehood and Iran's nuclear program, on which the prime minister argues he alone can resist foreign pressure to yield. "I want to make clear that all of this Likud spin is not something that we do," Herzog said in a speech on Saturday. "The public is fed up with Likud and with Benjamin Netanyahu." The latest opinion polls predict the Zionist Union taking between 24 and 26 of parliament's 120 seats in the election, compared to 20-22 seats for Likud. That could empower Netanyahu's challengers to build the next coalition government. He could scrape into a fourth term, however, if the Zionist Union fails to muster enough support in an Israeli political spectrum where right-leaning parties are predominant. For now, Likud's ideological allies in parliament are a threat as they sap votes from the ruling party, Netanyahu said. "The right-wing is splitting," he told Voice of the South radio. "The right-wing must unite behind me and vote Likud." That message is unlikely to be well-received among other nationalist leaders with whom Netanyahu is expected to speak at a demonstration on Sunday in Tel Aviv's main Rabin square, where tens of thousands of opposition voters rallied last week. Naftali Bennett of the far-right Jewish Home party, a partner in Netanyahu's outgoing government, has balked at ceding votes to Likud, saying he fears the prime minister could end up joining a broad, mainstream coalition with the Zionist Union. Some officials within Likud privately blame Netanyahu for a scattergun election campaign and blowback from his March 3 speech to the US Congress against the Obama administration's Iran strategy. "We're closing ranks now, but if Tuesday turns out badly for us, there will be a reckoning," one senior Likud delegate said, hinting Netanyahu could be ousted as party head. - Reuters