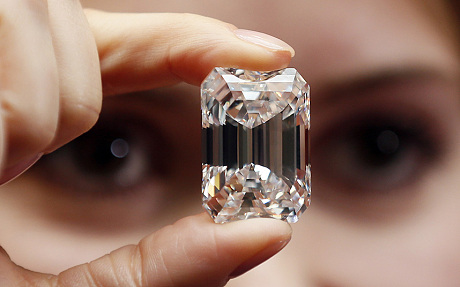 NEW YORK - An eye-popping, 100-carat diamond, the highlight of a magnificent jewels sale in New York on Tuesday, sold for $22.1 million, Sotheby's auction house said. The perfect classic emerald-cut D color diamond, which is about the size of a walnut and was mined by De Beers in southern Africa, was purchased by an anonymous buyer via a telephone bid. It had a pre-sale estimate of $19 million to $25 million. Gary Schuler, the head of Sotheby's jewelry department in New York, said the gem is the definition of perfection. "The color is whiter than white, it is free of any internal perfections, and so transparent that I can only compare it to a pool of water," he explained. The $22.1 million price, which includes the buyer's premium, fell short of the $30.6 million world record price paid for a 118.28 carat white diamond in Hong Kong in 2013. Sotheby's said only six perfect diamonds weighing more than 100 carats have been sold at auction in the last 25 years. A flawless pink diamond, dubbed the "Pink Star," set a world record price for a gemstone at auction when it sold for $83.02 million in Geneva in 2013. Schuler said the distinguishing characteristic of the huge diamond sold on Tuesday is its size and beautiful shape. Originally weighing over 200 carats, its owner spent more than a year perfecting its cut and polish. Sotheby's said that from 1990 to 2013 the price per carat for a 100-carat perfect diamond had risen from $125,000 to $260,000. The diamond was the top selling item in a sale of more than 350 jewels that were expected to sell for a total of more than $50 million. Other highlights include a pear-shaped purplish pink diamond weighing 6.24 carats that has a pre-sale estimate of up to $3.5 million as well as a blue diamond and colored diamond ring weighing 6.06 carats that could bring in as much as $4.5 million. Two Cartier Art Deco jewels, a rare platinum, emerald, sapphire, lapis lazuli and diamond pendant necklace as well as a ruby, emerald and diamond bracelet, will also be auctioned. The Baron de Rothschild necklace is expected to sell for up to $2.2 million and the bracelet has a pre-sale estimate of up to $1.8 million. Two Kashmir sapphire and diamond rings could each bring in $1 million or more, according to Sotheby's. - Reuters