Flu shots for adults under 65 may boost protection for seniors 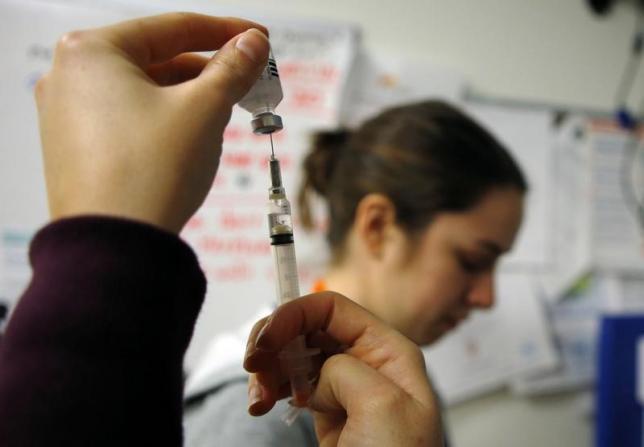 Flu shots for adults under 65 may boost protection for seniors

BOSTON - When healthy adults under age 65 get a flu shot to protect themselves, they may be helping older adults in their communities avoid the flu as well, according to a new analysis of nationwide US data. The odds of having a flu-related illness were 21 percent lower among seniors living in counties with the highest flu vaccination rates among people 18 to 64 years old, compared to seniors living in counties with the lowest rates, researchers found. The study’s results suggest that widespread vaccination of young, healthy adults against flu has the potential to prevent up to 5.9 percent of influenza diagnoses in elderly individuals, researchers write in Clinical Infectious Diseases. “Our study suggests that adults who have contact with the elderly should make a particular effort to receive an influenza vaccine. This includes both people who have elderly relatives in their households and people who have routine contact with the elderly,” lead author Glen B. Taksler of the Cleveland Clinic in Ohio said by email. “Our findings may help reframe the public image around flu vaccines, offering a positive context because getting vaccinated seems to help other people in the community,” he added. The Centers for Disease Control and Prevention (CDC) recommend an annual flu shot for everyone aged six months or older, with rare exceptions. Nearly 24,000 deaths each year in the U.S., on average, are the result of influenza, CDC estimates. Nearly two-thirds of hospitalizations for influenza-related illnesses and about 90 percent of flu-related deaths occur among people 65 or older, according to the agency. After seniors, the highest rates of flu-related complications and hospitalizations occur in young children and people of any age with certain underlying medical conditions. “These higher-risk people have a limited ability to protect themselves from influenza, because flu vaccines are less effective in the elderly and in people with weakened immune systems,” Taksler said. Young healthy adults are usually able to recover from the flu, but they can spread the infection to seniors and other higher-risk people in the community. To see if reducing flu infections among these younger adults might protect seniors by reducing their exposure, the researchers obtained data from a CDC telephone survey that included information about flu vaccination rates among 520,229 adults ages 18 to 64 in 313 urban counties. The data covered eight flu seasons between 2002 and 2010. Insurance claims that were billed to Medicare provided information about flu vaccination rates and influenza-related illnesses among more than 3 million Medicare patients during the same period. In addition to overall lower rates of flu-related illness among seniors where more young adults were vaccinated, the researchers found even greater benefits when seniors were vaccinated too. Immunized seniors had a 33 percent reduction in risk of flu-related illness associated with more young adults being vaccinated; unvaccinated seniors had only a 13 percent decline in risk. “This means that elderly adults who were proactive to try to prevent influenza still benefited from communitywide vaccination,” Taksler said. Even though elderly immune systems have a weaker response to the flu vaccine, the study team speculates that seniors who get a flu shot might require proportionately more encounters with infected individuals in their community to contract flu. Thus, if more nonelderly adults in the community are vaccinated, cases of flu would be expected to fall more quickly among vaccinated seniors than unvaccinated ones, they write. The link between higher flu vaccination rates in younger adults and a lower rate of flu-related illnesses in seniors was more pronounced during the peak months of flu seasons and in more severe flu seasons, as well as in years when the vaccine was a better match for the flu viruses in circulation. “Previous studies have shown that vaccinating school-aged children can reduce rates of influenza infection in adults,” said Dr. Michael L. Jackson, of Group Health Research Institute in Seattle, who was not involved in the research. “This study by Taksler and colleagues provides evidence that vaccination of non-senior adults also provides modest ‘herd immunity’ benefits to seniors,” he told Reuters Health by email. -Reuters