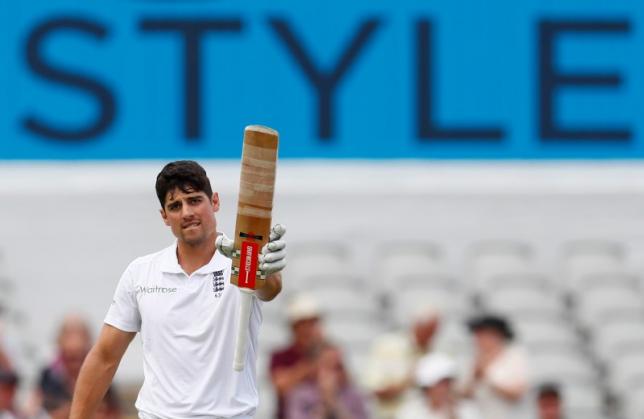 MANCHESTER – Captain Alastair Cook compiled a trademark century to lift England to a commanding 210 for two at tea on the first day of the second Test against Pakistan in Manchester on Friday. Cook, who won the toss in good batting conditions, shared a smooth second-wicket partnership of 185 with Joe Root (87 not out) before being bowled by Mohammad Amir for 105 just before the interval. Pakistan, who won the first Test, toiled in the field, their only other success coming in the morning when fast bowler Amir bowled Alex Hales for 10 with a rapid full-pitched delivery. Cook and Root carried the hosts to 95 for one at lunch and the skipper reached his 29th Test hundred shortly before tea, reward for a typically composed innings. The left-hander mixed watchful defence with crisp drives and cuts which brought him 15 fours before Amir produced a ball that kept low and crashed into his stumps off the bottom of the bat. Root sweetly straight-drove his second delivery from Rahat Ali to the boundary and also looked in good form after his recent barren patch, hitting 12 fours all around the ground. Pakistan won the first match of the four-Test series at Lord's by 75 runs. –Reuters