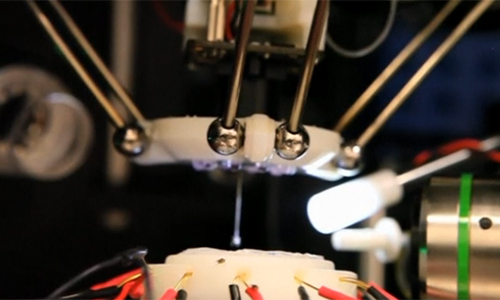 NEW YORK – Utilizing robotics, computer vision, and high speed cameras along with a powerful suit of sensors, this robot can handle and study fruit flies with unprecedented speed and accuracy. Fruit flies and humans have a lot in common. More than 50 percent of the genes known to affect human disease have counterparts in the tiny insect. Mark Schnitzer, Associate Professor of Biology and Applied Physics, Stanford University, saying: "Historically the fruit fly has been an important model for the study of various biological processes and has led to important discoveries initially in genetics but then in other fields as well." But making those discoveries is difficult because preparing tiny fruit fly brains for study is time consuming. Mark Schnitzer said: "We looked at this situation and thought, well, the fruit fly offers so many advantages, the powerful suit of genetic tools. On the other hand there is still a lot of human labor that is involved and with the advent of modern robotic technology we should be able to change the situation and to a degree of automation to the field that simply had not existed before." The robot works by releasing flies onto a dish in the pitch dark to ensure they don't fly away. Then a suction needle guided by infrared cameras catches a fly. Researchers can then image and prepare it for further study. All of this happens in a matter of seconds without the need to drug the flies. Cheng Huang, Fly Biologist, Stanford University, saying: "You can precisely handle the fly without any anaesthesia that means it can actually give you a clean brain to study." And a clean brain, says Huang, makes for more accurate results. "Even in flies there are a lot of genes related to human disease and there are a lot of fly-human disease models and that means you can induce a lot of symptoms." Symptoms to neurodegenerative diseases that now, thanks to a fly catching robot, researchers can better understand at a faster pace. –Reuters