FM Qureshi returns to Pakistan after 14-day successful US trip 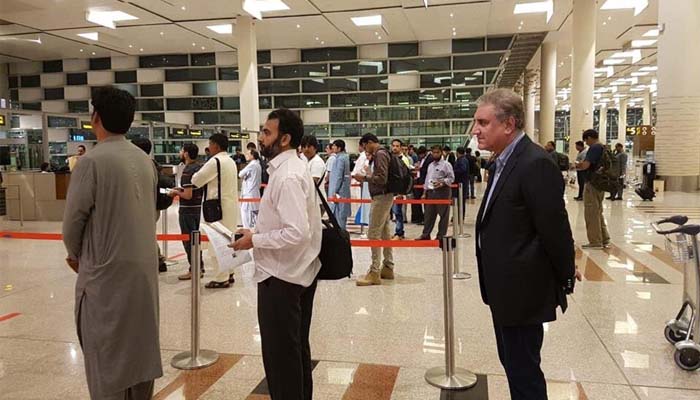 FM Qureshi returns to Pakistan after 14-day successful US trip

ISLAMABAD (92 News) – Minister for Foreign Affairs Shah Mehmood has returned to Pakistan in the wee hours of Friday after concluding the 14-day trip to the United States. The foreign minister presented the Pakistan’s stance at United Nation General Assembly (UNGA) in a best way. In his speech he highlighted human rights violations in Indian-Administered Kashmir and other issues facing the country. Meanwhile, he did not meet Indian External Affairs Minister Sushma Swaraj after India backtracked on its promise for the foreign ministers to meet. Qureshi visited Washington and New York and met with the top US leadership, as well as Pakistani representatives at the Embassy and delegations of various countries on the sidelines of the General Assembly’s 73rd session at the United Nations headquarters. The foreign minister, during his trip, led the Pakistani delegation at the UN General Assembly and addressed the 195 member states on the fifth day of the 73rd UN session. He also held talks with US Secretary of State Mike Pompeo and National Security Advisor John Bolton, with whom he discussed the South Asian regional issues and matters of mutual interest. On the sidelines of the UNGA, Qureshi also met with delegations and representatives of more than 40 countries. FM Qureshi arrived at Islamabad airport via a private airline in the wee hours of Friday. Earlier, Shah Mahmood Qureshi has said that Pakistan wants relations with the United States on the basis of mutual trust and respect. Addressing US Institute of Peace on Wednesday, he said that Pakistan’s sacrifices for peace should be acknowledged. “Safe havens of terrorists still exist in Afghanistan.” He said that it is improper to accuse Pakistan of problems in Afghanistan. “Pakistan will use all of its influence to bring the Taliban to the table.” The minister said that Pakistan’s bilateral relations with the US are dependent on the improvement of the situation in Afghanistan and their route to Washington is via Kabul. “Cutting off equipment and assistance that could be used to combat terrorism, I don’t know what that will help. The ‘blame game’ will not be productive. Blaming and shaming is easy, but where will it get us? We cannot surrender to terrorism. We have to take them on… We have to build on what we have achieved,” he declared. FM Shah Mahmood Qureshi said that the last two years of US-Pakistan relations have been tough and they are here to reconnect and rebuild, and focus on peace, reconciliation, and stability. “I am going back to Pakistan with hope. I am going back with a positive view,” he said.