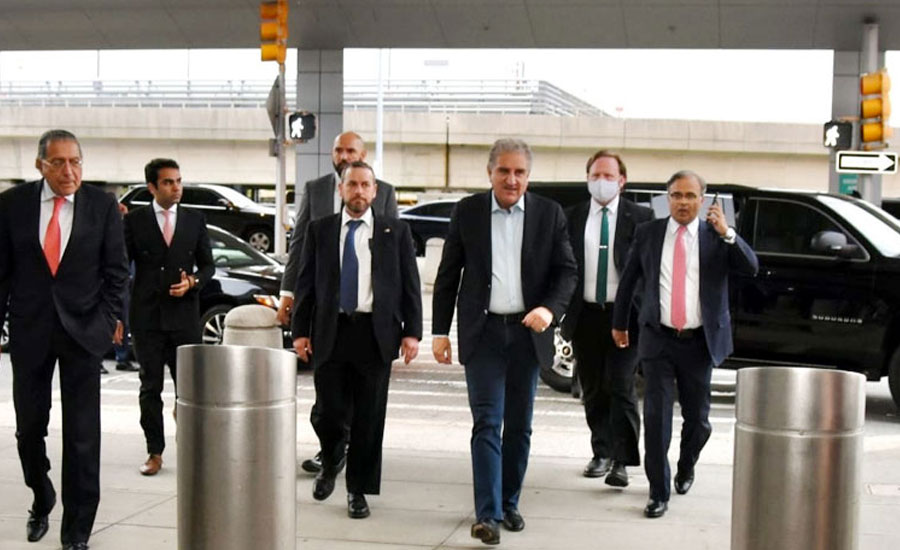 According to Foreign Office spokesperson, during the visit, FM Qureshi attended the special meeting of the United Nations General Assembly on Palestine and held meetings with his counterparts from other countries.

He also held talks with senior UN leadership on the situation in Palestine; and interacted with the members of the Pakistani community; representatives of Pakistani and international media; as well as members of the US Congress.

The minister reached New York from Turkey on 19th of this month along with the Foreign Ministers of Palestine, Turkey, and Tunisia. After his arrival, he hosted a working dinner of the foreign ministers and representatives of the OIC countries to consult and make collective efforts to halt Israeli provocation and aggression against innocent civilians in occupied Palestinian territories, ahead of the UN General Assembly's special meeting.

On 20th May, the Foreign Minister addressed the special meeting of the UN General Assembly and expressed the people of Pakistan's deep anguish and strong outrage against Israel's provocation against Al-Aqsa Mosque, indiscriminate and disproportionate use of force by Israel against Palestinian civilians.

The minister urged the international community, in particular the UN Security Council, to halt Israeli aggression and mobilize all possible humanitarian help, including medical supplies, to deal with the grave humanitarian situation in Gaza and other parts of occupied Palestinian territories. He also urged the UN Secretary General to immediately launch a comprehensive humanitarian assistance plan to help the Palestinians.

In his address, the Foreign Minister called on the UN General Assembly to take concrete steps to protect the Palestinians, including through the deployment of an international protection force and hold Israel accountable for its crimes against humanity.

He called for the establishment of a viable, independent and contiguous Palestinian State with pre-1967 borders, with Al-Quds Al-Sharif as its capital.

FM Qureshi also met with the Foreign Minister and Minister of State for Cabinet Affairs of Kuwait, Sheikh Ahmed Nasser Al-Mohammed Al-Sabah during which the two Foreign Ministers expressed deep concern over the deteriorating situation in the occupied Palestinian territories caused by the Israeli aggression.

In his meeting with the UN Secretary General António Guterres, the Foreign Minister expressed deep concern over the situation in the occupied Palestinian territories caused by Israeli aggression. He also briefed the UN Secretary General on the serious human rights and humanitarian situation in the Indian Illegally Occupied Jammu and Kashmir including continued illegal incarceration of the Kashmiri political leaders and extra-judicial killings.

He urged the UN Secretary General to use his good offices to resolve the Jammu and Kashmir dispute in line with the UN Charter and the relevant Security Council Resolutions. He, moreover, highlighted Pakistan's constructive efforts to facilitate the Afghan peace process.

The foreign minister held a meeting with the President of the UN General Assembly, Volkan Bozkir, in which he thanked him for his proactive leadership in convening the UN General Assembly meeting to discuss the situation in Palestine, and conveyed the entire Pakistani nation's strong sense of outrage at Israel's use of indiscriminate and disproportionate force against innocent Palestinians.

Briefing him on the deteriorating human rights and humanitarian situation in IIOJK, the Foreign Minister called for the resolution of the festering dispute of Jammu and Kashmir for lasting peace in South Asia.

During the visit, the foreign minister also interacted with senior Republican Senator Lindsey Graham; Senator Chris Van Hollen; Congresswoman Sheila Jackson Lee, Chairperson of Congressional Pakistan Caucus; and its Co-chair Congressman Thomas Suozzi, member of the House of Representatives from New York. The Foreign Minister also engaged with the leadership of the US House of Representatives' Subcommittee on Asia, the Pacific and Non-Proliferation, Chairman Ami Bera and Ranking member, Steven Chabot.

During these meetings, the Foreign Minister underscored that Pakistan attached great importance to its longstanding relationship with the United States; highlighted the government's emphasis on economic development and connectivity; and reaffirmed Pakistan's desire for a broad-based relationship with the United States that would advance the two countries' shared interests in the bilateral and regional spheres.

He also had intensive interactions with the Pakistani American community, during which he lauded the important role of the diaspora, and said that Prime Minister Imran Khan considered Overseas Pakistanis as great assets who continued to support the country by sending ever rising remittances. He went on to assure that under the leadership of Prime Minister Imran Khan, special emphasis was being laid on ensuring efficient service delivery to the Overseas Pakistanis.

The minister also held extensive media engagements with the local and international media during his stay in New York.

The visit of the Foreign Minister is a reaffirmation of Pakistan's principled and unequivocal support for the just causes of Islamic world including the inalienable right to self-determination of the people of Palestine and Jammu and Kashmir.