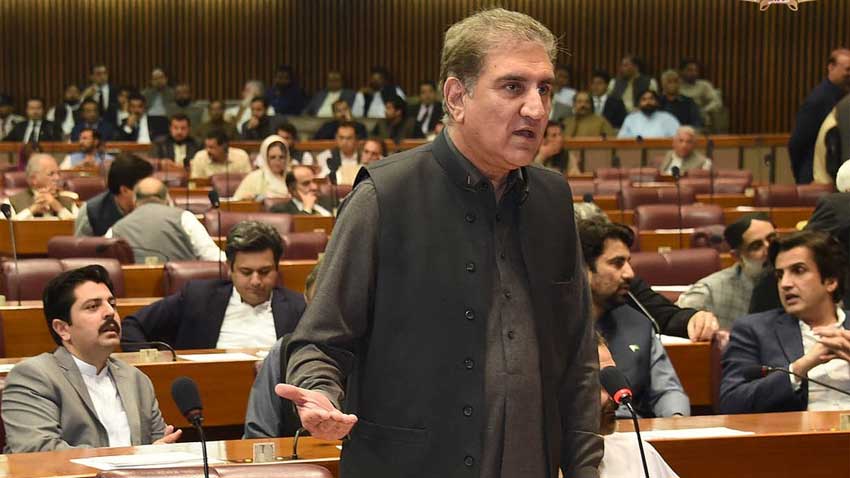 ISLAMABAD (92 News) – Minister for Foreign Affairs Shah Mehmood Qureshi assured that no Israeli aircraft was landed in Pakistan, saying that the reports regarding Israeli plane are contrary to the facts. Responding to the points of the opposition members in the National Assembly, the foreign minister has once again emphatically stated that the Saudi Economic Package for Pakistan carries no conditionality or strings. “Pakistan is not sending any troops to Yemen,” he said. He also said Pakistan only want to play a positive role for promotion of unity amongst the Muslim Ummah. On the economic issues, Shah Mehmood Qureshi called for evolving a charter of economy based on national consensus to steer the country out of current economic crisis. Responding to the points of PPP Leader Khurshid Shah, the foreign minister said that the country is faced with chronic economic situation and it is responsibility of both opposition and treasury benches to collectively work together to bail out the country out of current crisis. The minister said the government will give valuable consideration to the suggestions of the opposition benches and take guidance from them. He stressed that the present government is not responsible for the current economic crisis. Over the last ten years, he mentioned that the country’s debt soared to thirty thousand billion rupees from six thousand billion rupees. He said the repayment of this debt is not an easy task. Minister of State for Parliamentary Affairs Ali Muhammad said raising the issue of Israeli aircraft on black day was a big conspiracy to divide the nation. He said those demanding formation of a committee on the matter is actually expressing no confidence on the country’s defence institutions. He said, “We cannot tolerate landing of any Israeli aircraft on our land.” Taking the floor, Opposition Leader Shahbaz Sharif said the opposition accepts the clarification of the foreign minister on the matter of Israeli aircraft. The house also held discussion on the current economic situation of the country. Taking part in the debate, PML (N) leader Ahsan Iqbal said the government will have to show seriousness to take forward the country. Later, the opposition staged a walk out from the house saying it will not participate in the debate unless Finance Minister Asad Umer ensures his presence in the house. Minister for Human Rights Shireen Mazari said the opposition parties should focus on the discussion instead of resorting to personal attacks. Minister for Education Shafqat Mahmood said the opposition is using different pretexts to avoid discussion on the economic situation. Minister for Information and Broadcasting Fawad Chaudhary said the opposition has no reason to boycott the proceedings of the house as they are getting response to their queries. He said as a result of leadership of Prime Minister Imran Khan and policies of his government, the people and the businessmen are reposing confidence in the country’s economy. He in this regard referred to the bullish trend in the stock market. Taking part in the discussion on economic situation, Agha Hassan Baloch said the previous governments did not pay any attention to improve the economic situation of the country and bring the backward areas of the country at par with the developed ones. He appreciated the steps taken by the government on the economic front. Sabir Hussain Kaim Khani said the government should formulate agriculture and industrial policies to ensure food security and bolster exports. Dr Shahnaz Baloch said Balochistan is rich in mineral resources and these should be unearthed for the betterment of the country. Asma Qadeer said Pakistan is an important country and the world is now looking towards it to play its role in peace and stability. Muhammad Hashim said the government should cut down the non-developmental expenditures. He was confident that the fast track implementation of CPEC will help the country strengthen its economy. Munawara Munir appreciated the PTI government for recognizing the strategic importance of Balochistan and vowing to bring it at par with other developed regions of the country. She regretted that packages were announced for Balochistan in the past but these were never implemented. The house will now meet tomorrow morning at eleven.