ISLAMABAD (92 News) – Foreign Minister (FM) Shah Mehmood Qureshi said that Pakistan desired peace in the region as unrest and chaos would not serve any one’s interest. The minister said while talking to Pakistan’s High Commissioner to India Sohail Mahmood who called on him in Islamabad. 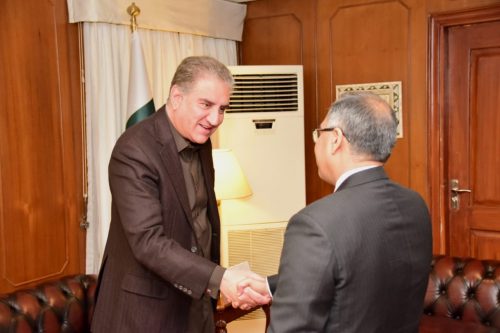 During the meeting, they exchanged views on overall security situation of the region in particular context of Indian allegations against Pakistan over the Pulwama incident. “We are seriously reviewing the emerging situation and I have written a letter to the UN Secretary General Antonio Guterres apprising him about the situation,” FM Qureshi said. Pakistan’s High Commissioner to India Sohail Mahmood is in Islamabad for consultations after Pulwama incident.

Earlier, Foreign Minister Shah Mahmood Qureshi asked the UN Secretary General to play his role for the de-escalation of current tensions which were caused by Indian government’s rhetoric against Pakistan over Pulwama attack. The minister said that he had written a letter to the UN secretary general, requesting him to play his role for the “de-escalation” of current tensions between India and Pakistan in the wake of the Pulwama attack. FM Qureshi said in his letter he had raised concerns over the negative tactics used by Prime Minister Narendra Modi’s government ahead of the elections in India. He said he had cautioned the secretary-general about India’s efforts. The FM said that the UN Chief has been requested to play his part for the de-escalation of current tensions created by irresponsible attitude of the Indian government after the Pulwama attack. He also said Pakistan has given a very measured and responsible response to the baseless accusations of India. Weeks before the attack in Indian-held Jammu Kashmir, the minister said, the Pakistan Foreign Office had informed the envoys of P5 countries that Islamabad feared that India would create a Pakistan-bashing atmosphere ahead of its elections and could resort to some misadventure in order to galvanise the extremist Hindu vote. The minister asked India to present actionable evidence of involvement of Pakistan-based groups in the Pulwama attack, if it had any, and assured that Pakistan would honestly investigate the same. Tensions between India and Pakistan are once again flared up following last week’s militant attack in Pulwama.