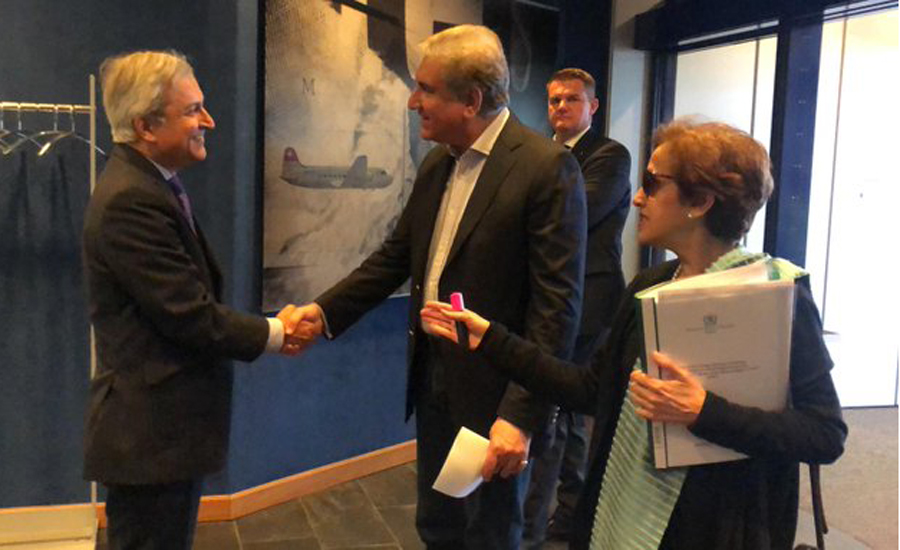 GENEVA (92 News) – Foreign Minister Shah Mahmood Qureshi on Monday reached Geneva to present the case of innocent Kashmiris at the 42nd session of UN Human Rights Council. Talking to the media, the foreign minister said that the meeting of UN Human Rights Council will start today. “The statement of High Commissioner for Human Rights Michelle Bachelet on Occupied Kashmir is very encouraging in which she demanded the lifting of curfew, opening of communication system and rehabilitation of basic human rights of Kashmiris. Today the UNHRC has said what we have been saying since long,” he said. https://twitter.com/SMQureshiPTI/status/1171057793488609280?s=20 Foreign Minister said that he will get an opportunity to highlight the Kashmir point of view before the international human rights organizations in the next two days. “Today the world is witnessing that the Indian barbarism is being exposed slowly in IOJ&K,” he said. https://twitter.com/SMQureshiPTI/status/1171058956816592896?s=20 On the sidelines of the 42nd session of UN Human Rights Council, Foreign Minister Shah Mahmood Qureshi will also hold meetings with leaders of Organization of Islamic Countries (OIC) and the World Health Organization (WHO). He will raise the Indian unilateral and illegal actions in Occupied Kashmir besides highlighting the threat posed to the region as a result of these actions. Earlier chairing the second meeting of Kashmir Cell in Islamabad, FM Qureshi said that he would present the case of innocent Kashmiris to the representatives of world community. He termed that he would shake the global conscience on serious human rights abuses in occupied Kashmir. On the other hand, curfew and lockdown continued at 36th day today (Monday) in Indian Occupied Kashmir (IoK) from August 5 when Narendra Modi government announced scraping of the special status of Jammu and Kashmir. The occupied territory continued to reel under strict military siege on the 36th consecutive day as all markets are closed while transport is off the road. There is no internet and mobile phone service in the Kashmir valley, which remains cut off from the rest of the world since August 5. Patients are scrambling for medicines while doctors are facing immense difficulties to reach the hospitals.