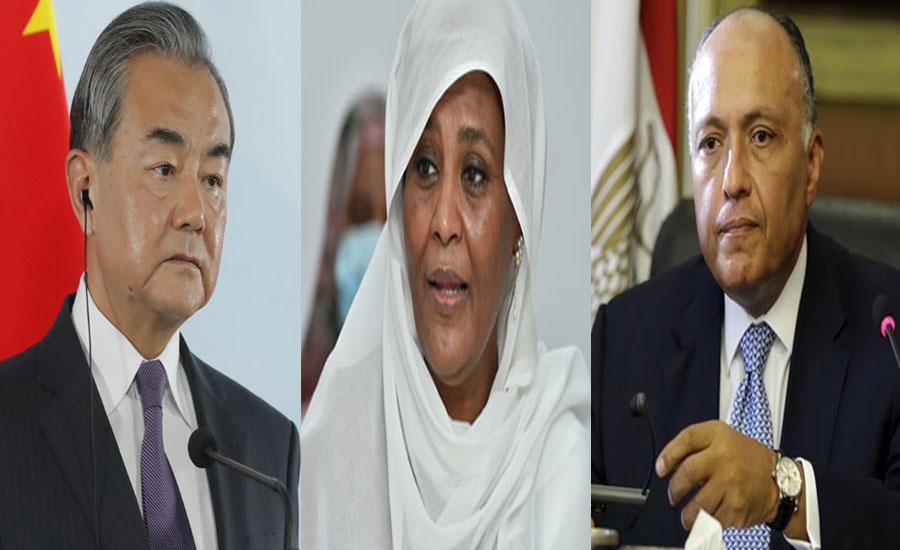 During the conversation with Chinese Foreign Minister, both the foreign ministers discussed the Palestinian issue, peace process in Afghanistan, and Pakistan-China bilateral relations.

FM Qureshi said the humanitarian situation in Palestine was becoming a major threat to peace and security of Middle East. He also mentioned that the violent attacks perpetrated by Israeli forces against the innocent worshipers in Al-Aqsa Mosque and unarmed civilians and the children in the occupied territories, were against humanitarian norms as well as the international law.

He underlined the importance of urgent steps by the international community to stop the Israeli attacks, protect the civilian population, facilitate engagement of the parties, and ensure just and lasting solution based on relevant UNSC resolutions and the two-state vision.

Qureshi congratulated Chinese leadership and its people for successful landing of Chinese spacecraft at Mars and underlined that it was a historic milestone for China in the technological realm.

The foreign minister underscored that the year 2021 had a special significance as it marked 70th anniversary of the establishment of diplomatic ties between the two countries. Over the years, our bilateral relationship had become an All-weather Strategic Cooperative Partnership, he added.

He underscored that Pakistan and China should continue to deepen their cooperation in fighting COVID-19. He thanked China for the support it had extended to Pakistan in containing the spread of the pandemic, including through provision of vaccines.

The foreign minister maintained that China-Afghanistan-Pakistan Trilateral Foreign Minister’s Dialogue was playing an important role in promoting peace and stability.

The two foreign ministers agreed to deepen Pakistan-China strategic cooperation and coordination to deal with the emerging challenges and reaffirmed both countries’ commitment to intensify their collective efforts to promote peace, stability and imperatives of justice.

Pakistan, Egypt agree to give highest priority to de-escalating situation in Palestine

Pakistan and Egypt have agreed to give highest priority to de-escalating the situation in Palestine and resolved to continue liaising closely on the matter.

This understanding was reached during a telephonic conversation between Foreign Minister Shah Mahmood Qureshi and his Egyptian Counterpart Sameh Hassan Shoukry.

They discussed the rapidly evolving situation in Palestine. Shah Mehmood Qureshi expressed deep concern and anguish over the desecration of the Al-Aqsa Mosque, the third holiest Muslim site and conveyed his apprehensions about the rapidly deteriorating situation.

The minister emphasized the need for regional powers and international community to play their part in de-escalating the tense situation. He appreciated Egypt for playing a positive role and making efforts for peace. Both Foreign Ministers exchanged views on how OIC could play a constructive role in protecting the Palestinians.

Foreign Minister Shoukry appreciated Pakistan for reaching out to brotherly Muslim countries and making an effort for restoring peace in the region.

He briefed Foreign Minister Qureshi on latest developments and apprised about Egypt s efforts in finding a diplomatic solution to the tense situation.

Pakistan and Sudan have agreed to make joint efforts at international fora for the peaceful resolution of the Palestine issue and to get stopped Israeli aggression against the innocent Palestinians.

This understanding reached during a telephonic conversation between Foreign Minister Shah Mahmood Qureshi and his Sudanese Counterpart Mariam al-Mahdi today.

Both the leaders exchanged views on matters of mutual interest, including Israeli aggression and latest situation in Palestine.

The two leaders strongly condemned the ongoing Israeli barbarism against the unarmed Palestinians.

Shah Mahmood Qureshi said the ongoing Israeli belligerence against oppressed Palestinians is a sheer violation of international laws and a matter of concerns for human rights bodies.

He said Pakistan has very clear stance over the Palestine issue to continue supporting Palestinians struggle.