FM terms his meeting with Taliban as positive, satisfactory 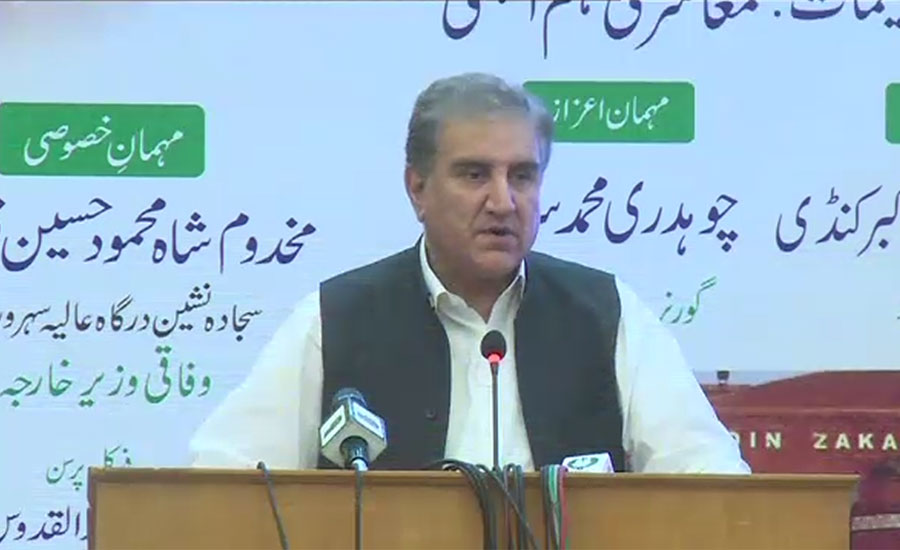 FM terms his meeting with Taliban as positive, satisfactory

MUTLAN (92 News) – After a key meeting with a delegation of the Afghan Taliban in the Foreign Office (FO), Foreign Minister (FM) Shah Mehmood Qureshi termed his meeting as positive and satisfactory. Addressing a ceremony in Multan, the minister asserted, “It was maximum effort of Pakistan that the Afghan peace process resumes and reaches its logical conclusion to cultivate the benefits of peace and prosperity in the region.

Next target of BJP-led government is Babri Mosque

“Why can’t Kashmir be liberated if Germany can become one,” he asked. He also said that the next target of BJP-led government will be Babri Mosque, where Indian Hindu-led government wanted to construct a temple. After lifting curfew in Indian Occupied Kashmir (IoK), the India will be exposed before the world forum and now the international community has started paying attention to Pakistan’s stance on Kashmir cause. Referring to the Afghan peace process, FM Qureshi warned against the spoilers saying there were certain elements who do not want peace and stability in the region, especially such elements which couldn’t see Pakistan making progress on the economic front. He said Pakistan has also suffered immensely because of instability in the neighbouring country. He said Pakistan continues to host 2.7 million Afghan refugees. He noted that peace in Afghanistan would help create immense economic opportunities. “This will help us attract investment and create job opportunities for our youth.” Earlier today, Pakistan and the Afghan Taliban have agreed on the importance of early revival of the Afghan peace process. The understanding came at a meeting between the two sides at the Foreign Office (FO) in Islamabad on Thursday. A 12 member delegation of the Afghan Taliban under the leadership of Mullah Baradar reached the FO to hold a dialogue with Foreign Minister (FM) Shah Mehmood Qureshi. Foreign Minister Shah Mahmood Qureshi led the Pakistani delegation while the Afghan side by Mullah Abdul Ghani Baradar.

In his remarks, Shah Mahmood Qureshi emphatically stated that Pakistan will continue to sincerely play the role of facilitator to make the Afghan peace process successful. FM Qureshi stressed that revival of the peace process is important to pave the way towards durable peace and stability in Afghanistan. He said war is no solution to any problem. “Dialogue is the only way forward for peace in Afghanistan,” he added. The minister said instability in Afghanistan is adversely affecting both Pakistan and Afghanistan. He said the world is now also endorsing Pakistan’s stance on Afghanistan. Shah Mahmood Qureshi pointed out that Pakistan-Afghanistan relations are rooted in common history, faith and culture. He said Pakistan has been hosting the Afghan refugees over the last four decades.

On the occasion, the Afghan Taliban delegation hailed Pakistan’s facilitator role in the peace process.