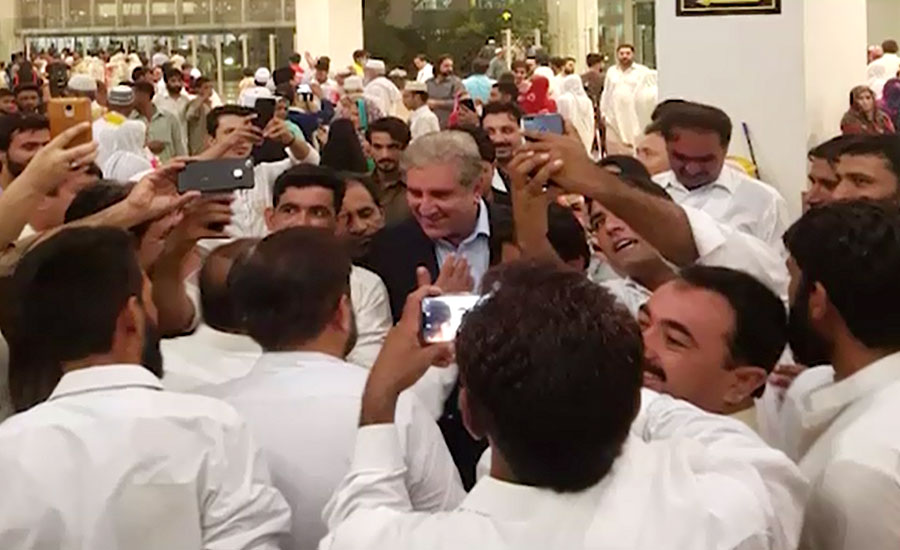 ISLAMABAD (92 News) – Foreign Minister (FM) Shah Mehmood Qureshi has vowed to raise voice for the rights of Kashmiri people at every forum. He said while talking to the journalists at Islamabad airport on his return from a three day successful visit to Geneva. On the arrival of Shah Mehmood Qureshi, a large crowd gathered around him and the airport lounge was echoed by the slogans of “Long Live Pakistan”, “Kashmir will become part of Pakistan” [Kashmir Bany Ga Pakistan]. It is pertinent to mention here that the foreign minister informed the UN Human Rights Council of Indian human rights violations in Indian occupied Kashmir (IoK). FM Qureshi termed that the real vicious face of India exposed before the world and now the world is criticizing India for the reign of oppression it has unleashed against millions of Muslims in IoK. Shah Mehmood Qureshi categorically said that the Kashmiri people are not alone in their just struggle for right to self-determination. He said Pakistan would continue to extend moral, political and diplomatic support to their Kashmiri brethren. https://www.youtube.com/watch?v=B1D-0HObYAU

Earlier, FM Qureshi presented the case of oppressed Kashmiris in UN Human Rights Council (UNHRC) in Geneva. While addressing the 42nd session of UNHRC, the minister said highlighted the highlighted the Indian atrocities in Indian Occupied Kashmir (IoK). He mentioned that India has converted the whole valley into a jail, and Kashmiris are being imprisoned without any offense. “India is refusing to give the right of self determination to the people of the occupied valley. Journalists and neutral observers are also highlighting the atrocities being committed there,” he maintained. “India is committing human rights violations in the valley which has exposed the true face of the so-called democratic country,” he added.

Kashmir not an internal affair of India

The foreign minister categorically stated that the long dispute of the IOK was not an internal affair of India. “Today, I have knocked on the doors of the Human Rights Council, the repository of the world’s conscience on human rights, to seek justice and respect for the people of Indian occupied Jammu and Kashmir. “We must not allow this august body to be embarrassed on the world stage. As a founding member of this Council, Pakistan feels morally and ethically bound to prevent this from occurring,” he said.