Fools should know that PPP has not come to an end, says Bilawal Bhutto 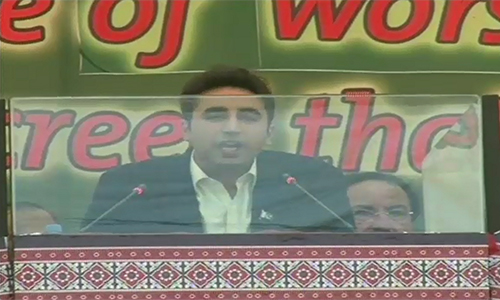 Fools should know that PPP has not come to an end, says Bilawal Bhutto

KARACHI (92 News) – Pakistan People’s Party (PPP) chairman Bilawal Bhutto has said that fools should know that his party has not come to an end. Addressing a ceremony held to express solidarity with minorities on Tuesday, he said that he is now carrying the party flag. “My mother challenged the people fomenting extremism in the name of religion,” he said. "The PPP is neither going to end nor it will end." The PPP chairman said that his party does not divide Pakistanis on the basis of religion or another pretext. “Our ideology was strong yesterday and is strong even today,” he said. Sindh Chief Minister Syed Qaim Ali Shah, Senator Sherry Rahman, Bakhtawar Bhutto and other leaders also attended the ceremony.