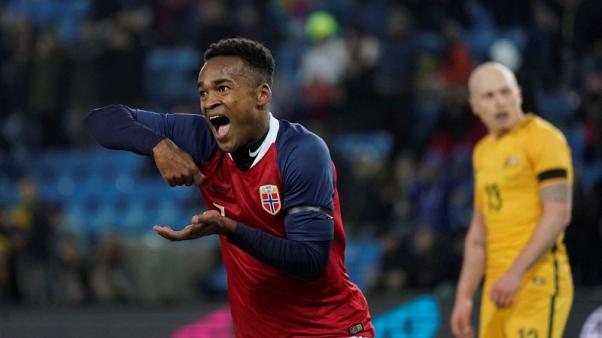 OSLO (Reuters) - New Australia coach Bert van Marwijk got his World Cup preparations off to the worst possible start as Norway striker Ola Kamara scored a hat-trick in a 4-1 victory over the Socceroos in a friendly in Oslo on Friday.

Dutchman Van Marwijk, who led his native country to a runners-up finish at the 2010 World Cup, saw midfielder Jackson Irvine give the visitors the lead with a thumping header, but by then the Norwegians had already threatened several times.

The 65-year-old Australia coach gave debuts to forwards Andrew Nabbout and Dimitri Petratos, but it was Kamara who caught the eye at the Ullevaal Stadion.

He levelled the scores nine minutes before halftime, rifling the ball home as the Australian defence struggled to contain a Norwegian team that came fourth in their qualifying group behind Germany, Northern Ireland and the Czech Republic.

Tore Reginiussen put his side in front three minutes into the second half, heading Stefan Johansen’s free kick into the net after being left unmarked in front of goal.

Kamara grabbed his second shortly before the hour mark, latching on to Markus Henriksen’s pass before applying a cool finish. He completed his hat-trick with a curling right-foot strike in stoppage time.

Australia, who beat Honduras in a play-off to make it to their fourth World Cup finals in a row, showed plenty of fighting spirit but were inferior to the Europeans.

The Australians open their World Cup campaign in Russia against France on June 16 before taking on Denmark and Peru in Group C.