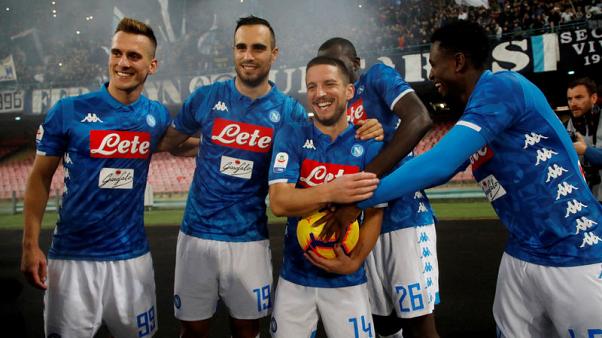 ROME (Reuters) - Napoli forward Dries Mertens scored a hat-trick to lead his side to a 5-1 rout of Empoli in Serie A , moving them back into second place in the standings. Lorenzo Insigne gave Napoli a ninth-minute lead before Mertens opened his account, placing a low shot past Ivan Provedal into the far corner from just outside the penalty area in the 38th minute. Francesco Caputo pulled one back just before the hour for Empoli only for Mertens to strike again, this time stroking a nonchalant effort over Provedal from the edge of the area. It was the Belgian’s 74th league goal for Napoli, overhauling Brazilian Careca’s total to make him the club’s fifth highest all-time scorer in Serie A. Substitute Arkadiusz Milik added a fourth before Mertens completed his hat-trick, rounding Provedal to score into an empty net after the Empoli goalkeeper rushed out of his penalty area to try to stop a counter. Coach Carlo Ancelotti continued to rotate his side, making seven changes to the team who drew 1-1 at home to AS Roma on Sunday and fielding his 14th different lineup in as many games in charge. Raul Albiol, Marek Hamsik, Milik and Jose Callejon were among the players rested ahead of Tuesday’s Champions League match at home to Paris St Germain. Napoli have 25 points from 11 games, three behind leaders Juventus who host Cagliari on Saturday.