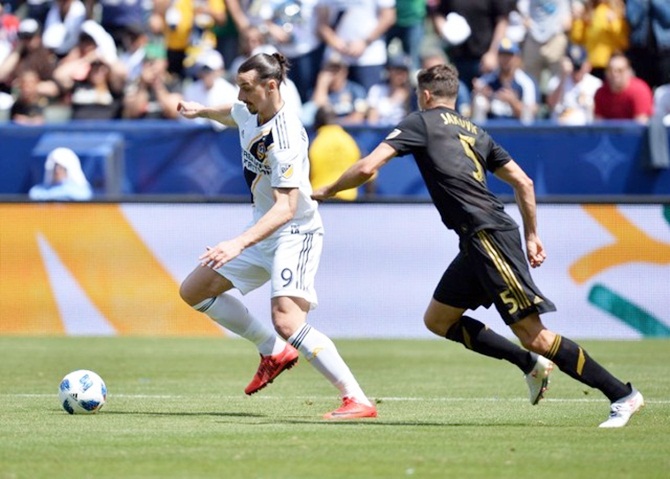 CARSON (Reuters) - Zlatan Ibrahimovic scored twice on his LA Galaxy debut including a winner in stoppage time as his new team battled back from three goals down to defeat the upstart LAFC 4-3 in a thrilling match on Saturday. Ibrahimovic, who came on as a substitute in the 71st minute, scored six minutes into his first MLS game with a dipping 35-metre shot that soared over the outstretched arms of LAFC goalie Tyler Miller. The Swedish striker followed up with a gutsy header in the 91st minute from a pass by Ashley Cole that proved to be Galaxy’s winner, sending the sell-out crowd of 27,068 into a frenzy on a sun-soaked day in Southern California. “I heard the crowd saying ‘We want Zlatan, we want Zlatan’,” the 36-year-old told reporters. “So I gave them Zlatan. They were pushing me and I was giving back.”
The inaugural “El Traffico” derby was all one-way traffic at the start as expansion team LAFC immediately put pressure on a short-handed Galaxy squad, who were playing without Romain Alessandrini, Jonathan dos Santos and Giovani dos Santos. Carlos Vela’s curler into the top left corner in the fifth minute gave LAFC an early lead. The Mexican struck again 21 minutes later from close range when Galaxy keeper David Bingham fell down and Vela hit the top of the crossbar before the ball landed over the line. An own goal by Galaxy defender Daniel Steres in the 48th minute gave LAFC a 3-0 lead and the highly-anticipated first meeting between the two LA teams appeared all but over. But Galaxy fought back in the second half with goals by Sebastian Lletget and Chris Pontius before Ibrahimovic stole the show. Trailing 3-1, Galaxy fans began chanting for Ibrahimovic and coach Sigi Schmid obliged, bringing the towering forward into his first match since December as he recovers from a knee injury suffered playing for England’s Manchester United. Ibrahimovic exceeded the sky-high expectations placed on his shoulders and instantly made good on his promise to help the Galaxy return to their winning ways after a dismal 2017 campaign where they failed to make the playoffs for the first time since 2008. “My history when I come to a new team, I always score in the first game,” said Ibrahimovic, who has played for European heavyweights Ajax Amsterdam, Juventus, Inter Milan, Barcelona, AC Milan and Paris St Germain. “I didn’t want to let it down this time.” Next up for the Galaxy (2-1-1) is a trip to Sporting Kansas City on April 8 while LAFC (2-1) host Atlanta United next Saturday.