LARGO, FLORIDA - Mike Woods laughed out loud the first time he saw a FootGolf video. But now the PGA director at the Haggin Oaks golf complex in Sacramento, California, is chuckling all the way to the bank as the soccer-golf hybrid craze rolls across the United States, bringing new revenue and new players to ailing golf courses. "Then it dawned on me that we are struggling so much to bring the millennial generation into the game of golf," Woods told Reuters, recalling his initial skepticism. "Yet that's the absolute target market for soccer." FootGolf, played by kicking a soccer ball over fairways and bunkers and into oversized holes by the rough, has been embraced by a US golf industry that has seen hundreds of courses shuttered in recent years. More than five million golfers left the sport since 2003, with some 25 million currently playing, according to the National Golf Foundation. "FootGolf is to the golf industry what snowboarding was to the ski industry," said Laura Balestrini, president of the American FootGolf League, founded in 2011, saying it has created a new audience for expensive-to-maintain golf facilities. For an investment of as little as $5,000 to buy the FootGolf setup as well as soccer balls, golf courses are realizing tens of thousands of dollars in new revenue, managers and experts said. The new sport is also on the rise in Europe and Latin America. Knee-high argyle socks and flat caps make up the official FootGolf tournament uniform, which forbids the wearing of turf-tearing soccer cleats. But casual players, including women, children and millennials uninterested in swinging a golf club, also turn up wearing sneakers, shorts and t-shirts. [caption id="attachment_18577" align="alignnone" width="500"] 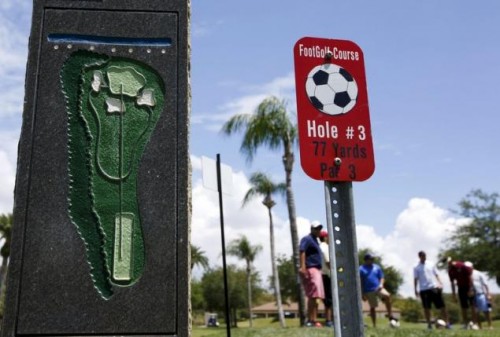 People stand at the FootGolf course at Largo Golf Course, which runs alongside the regular golf course, in Largo, Florida April 11, 2015. Reuters[/caption] HOLE NEW GAME Often played on the same undulating courses as golf, FootGolfers compete over nine or 18 holes for the least number of kicks to reach a green set up for FootGolf and land their soccer balls into a much larger hole. "It was fun, but harder than I thought," said 13-year-old Phillip Davis after his first-ever round of FootGolf, which also brought his grandmother to her community course in Largo, Florida for the first time. Many courses have been developed to allow golf and FootGolf to be played one after another. But the traditional golfers keep the pristine greens for themselves, while FootGolfers sink their balls on rougher ground. "It has just taken off virally, because it works," said Mike Tinkey, deputy CEO of the National Golf Course Owners Association, which recently partnered with the league to expand FootGolf beyond about 400 golf courses currently. "It takes the intimidation factor away," he added, noting the equipment and training needed to play a traditional round of golf. "Anybody pretty much can go out and kick the ball." Sacramento's Haggin Oaks became the country's fifth certified FootGolf course in 2013. That year, the course booked 9,120 FootGolf rounds. Traffic was equally robust last year, Woods said, noting that eight other local courses were offering it by then as well. Including ball rentals and food sales, Haggin Oaks netted $186,000 in revenue from FootGolf last year, he said. "For a lot of people, curiosity is piqued," said Lauren Scrudato, spokeswoman for Crystal Springs Resort in Hamburg, New Jersey, which is adding a second FootGolf course. "They are wondering 'What are these soccer balls doing on the golf course?'" On a recent Saturday afternoon, two bachelor parties and a 14-year-old's birthday party volleyed soccer balls on a golf course owned by the city of Largo in west central Florida. Matt and Joan Johnson, who live nearby, came out seeking a way to exercise with their two children. "It's just like golf," Joan Johnson told her 11-year-old daughter, as both stared down the fairway from the first tee. She then turned to her husband and asked: "How do you do golf?" - Reuters