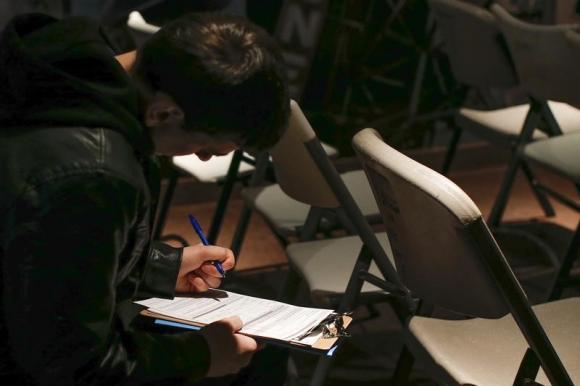 (Reuters) - America has added more than a million jobs in the space of three months but wages, especially for blue-collar workers, are showing few signs of gains. The Federal Reserve is following wage increases as well as employment numbers as it weighs whether to raise interest rates this year, and strong job creation data released on Friday shifted Wall Street bets on the timing of a hike to September from October. Hourly wage rates rose a sturdy 12 cents last month, but wages were up only 2.2 percent from a year earlier, a historically slow pace. Employment agencies, which play an increasingly large role in supplying workers to America's companies, say a surplus of labor is holding back wage gains, particularly for blue-collar workers. "The supply of unskilled labor is still pretty plentiful," said George Corona, chief operations officer at Kelly Services (KELYA.O), one of the country's largest providers of temporary employees for light assembly plants and distribution centers. The current pace of growth in salaries is far from the rates seen before the 2007-09 recession of 3-4 percent a year. In January, factory workers earned 1.2 percent an hour more that a year earlier, while construction workers got 2.3 percent more. Rising demand for labor on the back of a stronger domestic economy helped drive a 7 percent gain in Kelly's fourth-quarter U.S. revenues from services, up from 3.6 percent in the third quarter. Even for occupations that typically require a college degree, like engineers and lawyers, salaries still aren't rising as quickly as they would in a tight labor market, Keith Waddell, the chief financial officer at staffing firm Robert Half (RHI.N), said in a call with analysts on Jan. 29. Robert Half, which primarily places professionals and reported a 14 percent increase in U.S. staffing revenues in the fourth quarter, has been seeing wage gains just above 3 percent. It expects increases closer to 6 percent when the labor market tightens. The number of unemployed private sector workers for every job opening more than tripled during the recession, topping out above six in late 2009, and has fallen steadily in the recovery. In October and November it averaged 1.5, just a tenth of a point higher than its average in the year prior to the recession, indicating a tighter job market is in the offing. The tightening is seen across industries, with the ratio now just above pre-recession levels in construction and manufacturing. The numbers track experienced workers and the last industry in which they worked. Staffing agencies have played a growing role in the U.S. economy as companies have relied increasingly on temp hires. Temporary jobs accounted for a record-high 2.1 percent of total employment last year, about twice its share in 1990. Randstad (RAND.AS), a Netherlands-based staffing firm that is also a major player in the United States, is trying to improve recruiting efficiency to get ready for the tighter U.S. labor market it sees coming. For example, the firm is investing in technology that helps recruiters mine social networks, said Linda Galipeau, the chief executive for Randstad North America. Eventually it will become harder to find forklift operators, machinists and welders. Galipeau said that might be soon, though the lack of wage pressure for blue-collar jobs means this day hasn't yet arrived. "We're back to a market that feels a little bit more like 2005 or 2007 than the market we have felt in last four years," she said.