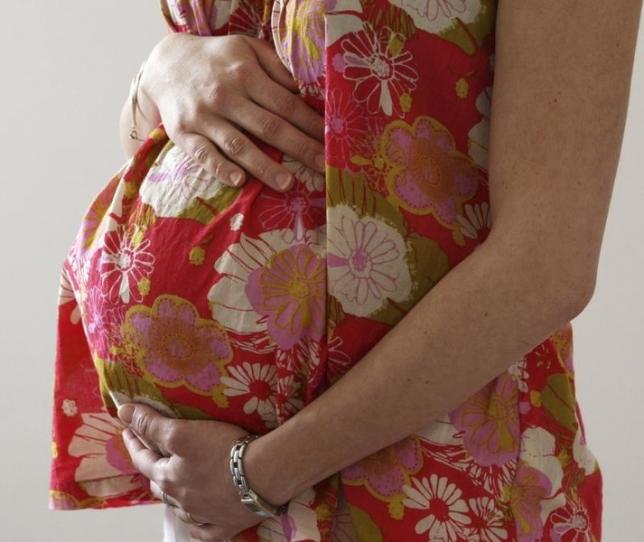 GENEVA - Some women pregnant with unusually large babies may benefit from inducing labor to reduce the odds that the infants' shoulders get stuck during delivery, a European study suggests. Generally, doctors don't induce labor before babies are considered full term at about 39 weeks of pregnancy because earlier deliveries can lead to breathing difficulties and other complications for infants. But, because oversized babies risk serious injury if their shoulders get stuck, researchers looked at inducing labor at 37 to 38 weeks to see whether preventing these infants from growing larger could make delivery safer. "I believe that the benefits of induction outweighed the potential risk of an early term birth" for the small percentage of infants who are exceptionally large, lead author Dr. Michel Boulvain, of the department of obstetrics and gynecology at Geneva University Hospitals in Switzerland, said by email. Boulvain and colleagues studied labor induction as an option to reduce what's known as shoulder dystocia, a condition that happens when the baby's head delivers and then one or both shoulders get stuck behind the mother's pelvic bone, preventing the rest of the infant from emerging. These babies are at risk for fractures, nerve damage in the spine and suffocation during delivery. Shoulder dystocia happens naturally in about 1 percent of normal-weight births, but the complication occurs in about 10 percent of oversized babies, according to the American Congress of Obstetricians and Gynecologists. The researchers used sonograms to identify more than 800 women whose babies were in the 95 percentile for weight based on their gestational age. About half of the women were randomly chosen for labor induction, while the rest of the mothers were monitored closely until they went into labor naturally or induction became necessary for other medical reasons. The women were patients at 19 university hospitals across Belgium, France and Switzerland. Labor was induced in 366 of the 409 women assigned to the induction group, and in 116 of the 413 women assigned to monitoring. Shoulder dystocia, delayed delivery of the body after the head emerged or fractures occurred in 2 percent of infants in the group assigned to labor induction, compared to 6 percent of the group assigned to monitoring. One case of shoulder dystocia was prevented for every 25 labor inductions, the study found. There was no difference in cesarean section rates between the two groups. The authors acknowledge limitations in the study, including a study group that was smaller than they had expected because it was difficult getting women to volunteer. In addition, the use of sonograms late in pregnancy to estimate an infant's weight at delivery can be imprecise, the study team writes in The Lancet. Waiting to induce labor until 39 weeks or later might diminish the benefit in terms of preventing shoulder dystocia, Boulvain said. At this point, the intervention may be less likely to decrease the birth weight or prevent injuries than it would be a week or two earlier in pregnancy. "Then, the balance between benefits and risks may swing the other way," he said. The study findings point to a delicate balancing act for women and clinicians between trying to use induction at 37 to 38 weeks to prevent potentially serious injuries to babies and avoiding deliveries before 39 weeks that can also potentially endanger infants, Dr. Aaron Caughey, an obstetrician and gynecologist at Oregon Health and Science University in Portland, writes in an editorial accompanying the study. Historically, labor induction has been linked to higher rates of cesarean sections, and, when done before 39 weeks is associated with higher risks of neonatal complications like immature lungs, Caughey said by email. Still, he said, "the Lancet study would suggest that in the setting of a particularly large fetus, there may be some benefit to induction of labor." - Reuters