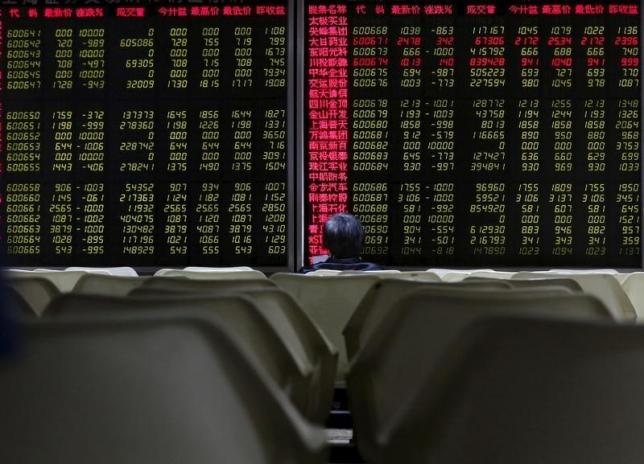 SINGAPORE - Foreign investors are starting to make a beeline for Asia, buying up regional stocks at their fastest clip in almost a year thanks to attractive valuations, signs of stability in Chinese markets and fresh liquidity support from the world's top central banks. What is significant for Asian businesses in particular is that much of the money is coming from longer-term focussed funds, which - barring significant deterioration in fundamentals - would have a greater tolerance for brief spells of volatility. Having dumped Asian stocks for most of the past year, overseas investors purchased $2.65 billion (1.8 billion pounds) of regional equities this month, the most since the whole of May 2015, according to EPFR data. "Compared to the gloom earlier in the year, investors are now less fearful," said Paul O'Connor, co-head of multi-asset strategy at Henderson Global Investors in London, which has recently reduced its underweight position in emerging market equities, including Asia. Vigilance is of course the name of the game as the global economy faces a myriad of challenges including a slowdown in China, flagging growth in Europe, risks of Britain exiting the European Union and the ever present threat of terrorism - Brussels this week became the latest target of Islamic State attacks. All the same, investors starved of growth opportunities are making the most of some signs of stability in China's economy and its markets. Aggressive steps by policymakers to stabilise their economies, including the Bank of Japan's historic shift to negative rates in late January, stepped-up stimulus by the European Central Bank and more support measures in China have also helped calm nerves. Most offshore funds are zeroing in on attractive valuations on offer in Asian equities as corporate earnings growth estimates in the region pull up ahead of even a brightening United States after lagging last year. "We thought markets over reacted in January and have reduced our cash levels in March," said Sean Taylor, Asia-Pacific chief investment officer at Deutsche Asset & Wealth Management in Hong Kong, which has upgraded emerging market equities to neutral, with a preference for Asia. SCARY JANUARY January was indeed a scary month for investors as a sharp decline in the Chinese yuan - coming after a summer crash in mainland equities and a surprise currency devaluation in August - stoked fears of policy missteps and a hard landing for the world's second-biggest economy. On top of this, a collapse in oil prices and stronger dollar led to concerns the Federal Reserve may have miscalculated when it raised rates in the United States - a big market for many of Asia's trade-reliant economies - for the first time in almost a decade. The MSCI Emerging Asia index .MIMS00000PUS fell 13 percent from the start of the year to its low point on Jan. 21. In the nine months to the end of February, foreign selling of Asian equities totalled $51 billion. Fast-forward to the present, and the palpable bounce in sentiment is evident in the MSCI Emerging Asia index, which is up 14 percent since the mid-January trough. Global investors held 5.4 percent of portfolios in cash in January and 5.6 percent in February, a 15-year high, according to fund manager surveys by Bank of America Merrill Lynch. That's down to 5.1 percent in March. VOLATILITY WATCH Markets have also taken note of last week's change of stance by the Fed, which in a nod to growth concerns halved its estimate for interest rate hikes to two quarter-point increases this year. These positive signals appear to have supported commodities. Oil prices CLc1 LCOc1, which dragged stocks down when they slumped to record lows earlier this year, are up more than 50 percent from those troughs. To be sure, the risk factors around global growth haven't suddenly evaporated, so investor resilience will be tested by fickle markets. Volatility "could be the norm through this year, as the market grapples with the interplay between poor fundamentals and extremely low valuations," said Kannan Venkataramani, senior portfolio manager for Asian emerging markets equity at NN Investment Partners in Singapore. -Reuters