Forget Johnson and there are no magic balls, says Cook 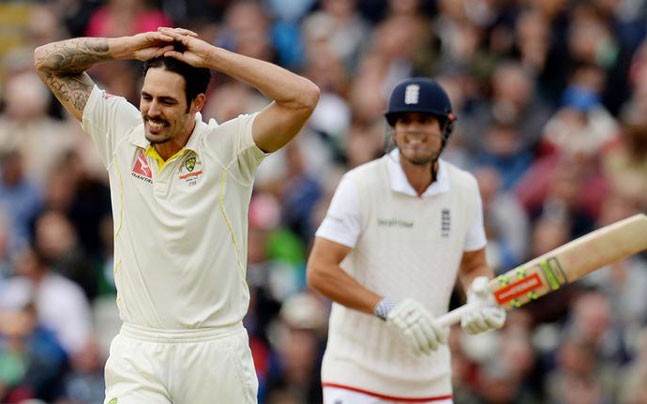 Forget Johnson and there are no magic balls, says Cook

Johnson etched his name into Australian sporting folklore by plundering England’s order for 37 wickets at an average of 13.97 to be named man-of-the-series in the 2013-14 Ashes, which the hosts won 5-0.

With the first test starting at the Gabba in Brisbane from Thursday, Australia off-spinner Nathan Lyon’s comments that the home side’s pace attack could again end careers have spiced up the pre-series war of words.

”Mitch bowled outstandingly in that series, one of the best periods of bowling I’ve ever faced, backed up by Ryan Harris, Peter Siddle -- (but) they’re no longer playing,“ Cook told reporters on Tuesday. ”So in one sense it’s a bit irrelevant.

“It happened four years ago and it’s all what happens on Thursday rather than looking back. England have won four of the last five Ashes series, so you can look at what you want.”

The verbal volleys before the start of the Ashes has amused England opening batsman Cook, who believes all the talk will make way for cricket after the first couple of hours in Brisbane.

”I had a really nice 10-minute chat with Nathan,“ he said. ”He was the first person I saw when I got to the ground, asking how my kids were.

“It just makes me chuckle, I suppose -- it makes everyone chuckle. It is what it is. All the talking stops very quickly and the series becomes a normal series after the first two hours.”

Cook was impressed by Australia’s current pace attack of Mitchell Starc, Josh Hazlewood and Pat Cummins but assured the batsmen in his team that there were no magic balls.

”They’re not suddenly bowling 150 miles an hour. (They‘ve) not got magic balls which start way outside the stumps and swing miles and stuff. “They’re very good bowlers with good records. As batters, that is the challenge we’ve got in the next seven weeks.”