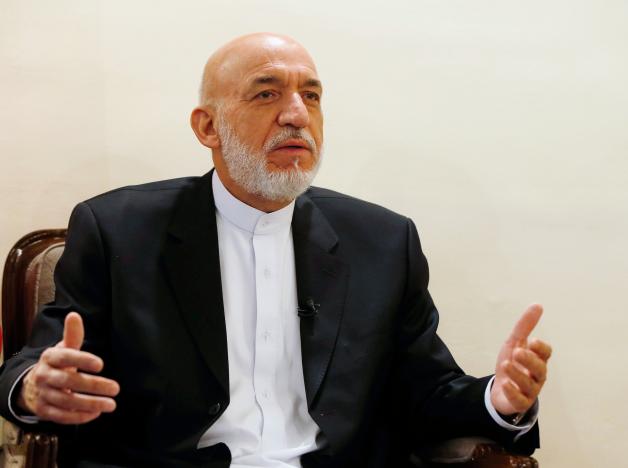 KABUL – Former Afghan President Hamid Karzai has sharply criticized new authorities giving the US military greater freedom to fight Taliban insurgents, saying they were a further erosion of the country's sovereignty.
In an interview, Karzai, who continues to exert considerable behind-the-scenes influence on Afghan politics, also called on the Islamist militant movement to be more realistic in demands that have hampered progress in peace talks. His comments on American involvement in the war were at odds with the government of his successor, President Ashraf Ghani, which has welcomed U.S. political and military support. "How could the U.S. president authorize U.S. troops to launch attacks on their own in Afghanistan?" Karzai said, referring to Barack Obama's June decision to alter the rules of engagement for the American military. "Don't we have a government here? Aren't we a sovereign country?" The new authorities, which U.S. officials say were agreed with the Afghan government, affect ground operations where U.S. troops provide support to Afghan forces as well as air combat, and Karzai has long been critical of U.S. air strikes in Afghanistan, be they by fighter jets, helicopters or drones. He would ban them altogether, even though the Afghan armed forces, struggling to contain the insurgency, say they could not cope without support from the skies and want more. The former leader's opposition reflects broader unease among Afghans who believe innocent people have been killed in air attacks targeting militants, unease that may grow with new powers granted to the U.S. military. The U.S. says its air strikes support Afghan operations and it takes extreme care to avoid civilian casualties, despite incidents such as the bombing of a Medecins Sans Frontieres hospital in Kunduz last year in which 42 people died. Calling Afghanistan the victim of a 21st century version of the "Great Game" between competing powers on the 19th century borders of British India, Karzai blamed the United States and Pakistan for "a war that is not ours". TALIBAN MUST BE REALISTIC However, he added that he wanted to reshape the partnership between Kabul and Washington, not end an alliance which brought him to power over a decade ago and still ensures billions of dollars in aid and military support each year. Karzai was succeeded by Ghani two years ago. "I want to be allies with the United States, I want to be partners with the United States," he said. "But it must be a partnership, not a master-and-slave relationship. "We must remain the owners of this house, the United States of America, a guest." As for the Taliban, Karzai said he saw little change in tactics since the death of former leader Mullah Akhtar Mansour in a U.S. drone strike on Pakistani soil in May. He appealed to the Taliban "as fellow Afghans to recognize that this is their country" and to break free of the influence of Pakistan, which despite frequent denials, is blamed by Afghanistan for supporting the insurgency. "I would call on the Taliban to be free from foreign influence - in this case Pakistan, the Pakistan intelligence and military," Karzai said. He added that they had to be more realistic in their demands to make peace talks possible. "When they say that foreign forces must leave first and then we will talk, then I tell them that if they keep waiting for that, a lot of Afghan blood will be shed," he said. COUNTRY "NEEDS TO REGAIN CONFIDENCE" Despite suspicions among some close to the government that he wants to destabilize Ghani, Karzai said he expected the U.S.-backed government to serve its full five-year term. This is even though parliamentary elections and a special "loya jirga", or gathering of Afghan leaders and elders, have not materialized as scheduled within the first two years. "The government should know that no one is going to ask them to go away. We want them to complete their term, we want them to complete the five years," he said. "But the country needs a voice, the country needs to regain its confidence." To do that, he called for a loya jirga. "The loya jirga is an expression of authority of the Afghan people. Things must return to the ownership of the Afghan people," said Karzai, who has a deep network of political connections throughout the country. "It's an institution for a time of crisis and we are in crisis." The 58-year-old dismissed suggestions that such a gathering, including opponents and allies of the government, could undermine stability and weaken an administration that has struggled to overcome internal rivalries. Adding to the challenges, the Taliban have stepped up their insurgency, while thousands of young people, unable to find work, prefer to risk a perilous journey to seek a better life in Europe. "The loya jirga is an expression of authority of the Afghan people. Things must return to the ownership of the Afghan people," Karzai said. –Reuters