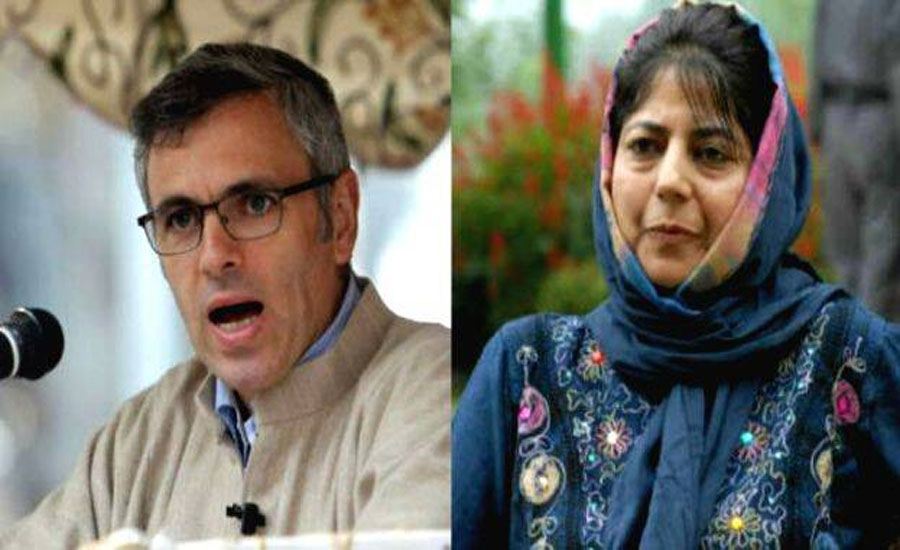 SRINAGAR (92 News) – Amid curfew in the valley, Indian forces arrested former chief ministers of Indian-occupied Kashmir Mehbooba Mufti and Omar Abdullah along with two other prominent political leaders on Monday, the India's state news agency reported. “J&K People’s Conference leaders Sajjad Lone and Imran Ansari were also arrested," another media outlet said. A notice issued to Ms Mufti stated that she has been detained because her activities “are likely to cause breach of peace”. The arrests come hours after the Modi-led Indian government scrapped Article 370 of the Indian constitution which granted special status to IoK. The article gave Kashmir its own constitution and decision-making rights for all matters except for defence, communications and foreign affairs. The law also forbade Indians outside the state from permanently settling, buying land, holding local government jobs and securing education scholarships. Mehbooba Mufti and Omar Abdullah condemned BJP's revocation of the special constitutional status of occupied Kashmir. "Today marks the darkest day in Indian democracy. Decision of Jammu and Kashmir leadership to reject two nation theory in 1947 & align with India has backfired. Unilateral decision of Government of India to scrap Article 370 is illegal & unconstitutional which will make India an occupational force in J&K," Mufti said in the first of many tweets. https://twitter.com/MehboobaMufti/status/1158257894149615616 "It will have catastrophic consequences for the subcontinent. Government of India's intentions are clear. They want the territory of J&K by terrorising it’s people. India has failed Kashmir in keeping its promises. https://twitter.com/MehboobaMufti/status/1158257896926240768 "Already under house arrest & not allowed to have visitors either. Not sure how long I’ll be able to communicate. Is this the India we acceded to? https://twitter.com/MehboobaMufti/status/1158262122385555458 "GOIs intention is clear & sinister. They want to change demography of the only Muslim majority state in India, disempower Muslims to the extent where they become second class citizens in their own state. "The way some sections of media & civil society are celebrating these developments with glee is disgusting & disconcerting." 'A long and tough battle lies ahead' In his statement, Omar Abdullah, who is vice-president of National Conference and former chief minister of Jammu & Kashmir, said: "Government of India's unilateral and shocking decisions today are a total betrayal of the trust that the people of Jammu & Kashmir had reposed in India when the State acceded to it in 1947 — the decisions will have far-reaching and dangerous consequences. "This is an aggression against people of the State as had been warned by an all-parties meeting in Srinagar yesterday. "GOI has resorted to deceit and stealth in recent weeks to lay the ground for these disastrous decisions. Our darkest apprehensions have unfortunately come true after the GOI and it's representatives in Jammu and Kashmir lied to us that nothing major was planned. "The announcement was made after the entire State, particularly the Kashmir Valley, was turned into a garrison. Those of us who gave democratic voice to the people of Jammu & Kashmir, are incarcerated as thousands of armed security personnel have been put on the ground. "The scrapping of Articles 370 and 35A raise fundamental questions on the state's accession because that was done on the very terms enunciated in these Articles. Seasoned Kashmiri leader Syed Ali Gilani in his video statement asked Indians to see the funeral of democracy in their country. Meanwhile, Indian forces converted the valley of Kashmir into a military cantonment on Monday by imposing curfew. The cell phone and internet services were closed.