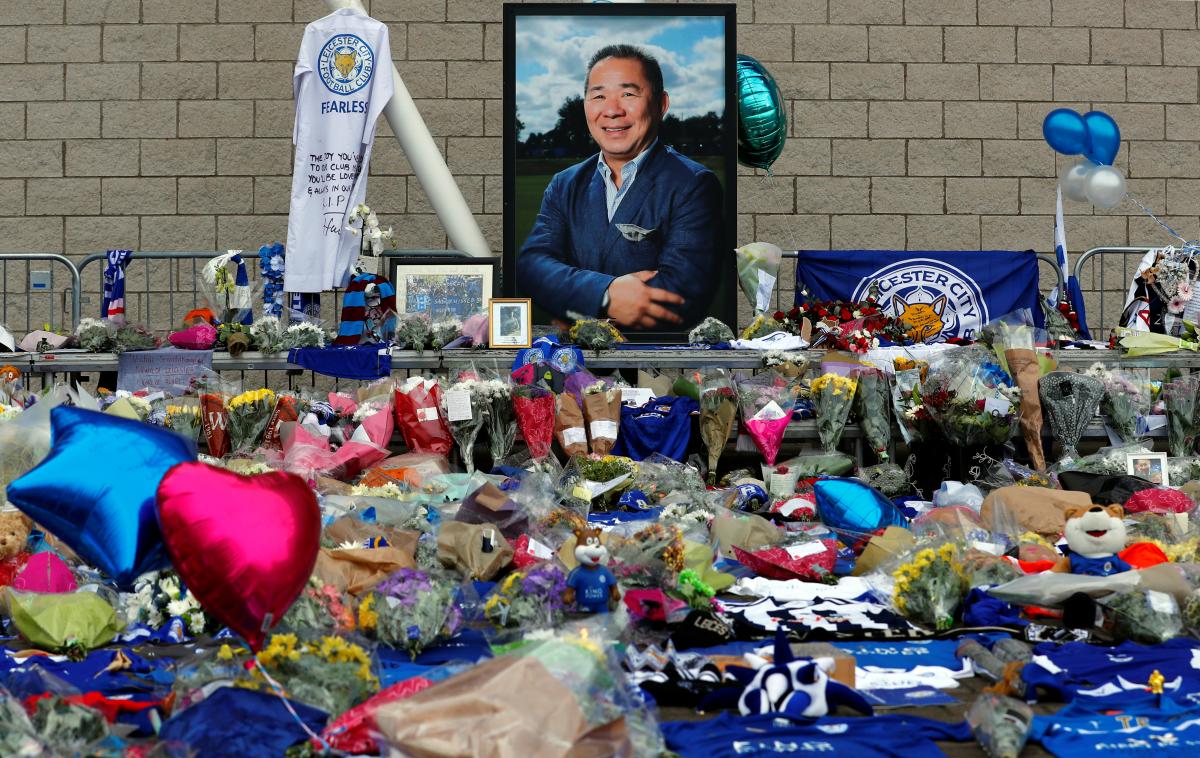 (Reuters) - Former Leicester City managers Claudio Ranieri and Nigel Pearson joined the voices of condolence for the club’s chairman Vichai Srivaddhanaprabha, who was killed in a helicopter crash on Saturday night.
Thai businessman Vichai died along with four others when his helicopter crashed and then exploded outside the club’s King Power Stadium after a Premier League match against West Ham United. Leicester, who confirmed Saturday’s league match at Cardiff City would go ahead as scheduled, opened a book of condolence for fans to pay tribute at the stadium on Tuesday. Many had left scarves and flowers outside the ground in the preceding days.
Ranieri, whom Vichai brought in as Leicester coach in 2015, led them in their sensational run to the Premier League title the next year, defying odds of 5000-1.
“I was terribly shaken by the news. He was a good man and always had a positive word for everyone. His positivity and ability to make everybody love him was clear for all to see. He came into the locker room only to dispense kind words, never to reproach you,” Ranieri told Sky Sport Italia. “Everything he touched became better,” he said, adding: “I immediately thought he was a positive person, full of energy.” The Italian coach had taken over from Nigel Pearson, who managed the club in two spells from 2008-10 and then from 2011 following Vichai’s takeover the previous year. Pearson is credited with saving Leicester from relegation in 2014-15, his side winning seven of their last eight matches, before he was sacked after disagreements with the board. Despite his parting of ways, Pearson was full of praise for Vichai’s contribution to Leicester’s fairytale. “The leadership and managerial processes he instilled and encouraged within Leicester City over a sustained period of time has borne fruit in such a way that people throughout the world witnessed the impossible by seeing a club win the Premier League in the most incredible circumstances,” Pearson said. “This most definitely ensured the belief that sporting miracles can happen... On a personal level, a manager could not have wished for a better boss. “I’m sure the wider football world will offer some solace for his loved ones. I will miss ‘The Boss’.” Pearson’s new club OH Leuven, where Vichai also acted as chairman, announced they had postponed Wednesday’s fixture against Lommel in the Belgium second division. The Premier League said Leicester’s match against Cardiff on Saturday would go ahead following consultation with the Midlands club. “As a mark of respect, players will wear black armbands at all Premier League fixtures this weekend. Clubs will also pay tribute by holding a minute’s silence,” the Premier League said in a statement. Police have named the other victims of the crash as passengers Izabela Roza Lechowiczas, Nursara Suknamai and Kaveporn Punpare, and pilot Eric Swaffer. The UK’s Air Accidents Investigation Branch (AAIB) said it had recovered the flight data recorder and would continue to investigate the cause of the crash.