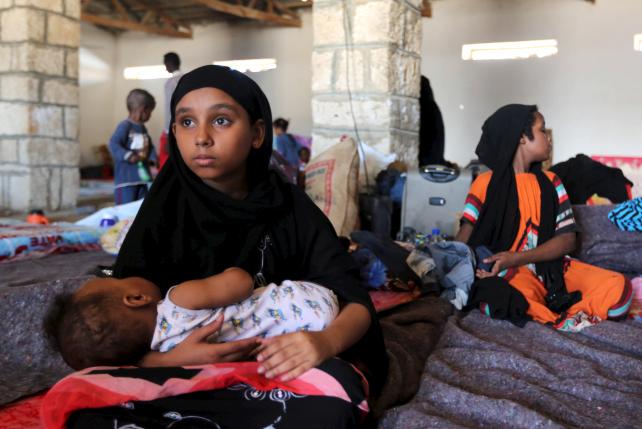 ADEN - Yemen's former president Ali Abdullah Saleh said on Friday he would not leave the country, dismissing reports in the Gulf Arab media that he was seeking a safe exit as Saudi Arabian war planes bomb troops loyal to him and their Houthi militia allies. The United Nations, meanwhile, said about 150,000 people had been driven from their homes by three weeks of air strikes and ground fighting and more than 750 people killed. Many schools, hospitals and mosques had been damaged or destroyed in the conflict, it said. A Saudi-led coalition began its air campaign on March 25 after the Houthi rebels, who run most of the country, closed in on the southern port city of Aden and forced the Saudi-backed President Abd-Rabbu Mansour to flee to Riyadh. The Iran-allied Houthis, a Shi'ite Muslim movement from northern Yemen, have formed an alliance of convenience with Saleh, who is widely believed to be plotting behind the scenes to make a comeback on Yemen's tumultuous political scene. But military sources have said some army units loyal to Saleh have defected and now support Hadi. Saudi-owned Arabiya TV, citing a Gulf official, said representatives of Saleh had visited Arab capitals and floated an initiative for him and his family to leave safely. Saleh scoffed at the report. "I'm not the type who goes looking for a place to live in Jeddah, Paris or Europe. My country is my birthplace. The person who can say to Ali Abdullah Saleh 'leave your country' has not been and will not be born," he wrote on his Facebook page. Saleh, once backed by Saudi Arabia, is widely regarded as one of the Middle East's most skilled political operators. Despite being forced to step down in 2012 under a Gulf-brokered transition plan following protests against his 22-year rule, he won immunity in the deal and has remained a powerful political player. UN APPEAL FOR FUNDS Though rooted in local rivalries, the conflict is the newest front in a sectarian proxy war between Sunni-ruled Saudi Arabia and Shi'ite Iran that also stretches to Iraq and Syria. Iran called this week for a ceasefire and dialogue but the appeal fell on deaf ears. In Geneva on Friday, the UN humanitarian agency OCHA said about 150,000 people have been displaced -- 50 percent more than the previous UN estimate. Health facilities had reported 767 deaths from March 19 to April 13, almost certainly an underestimate, it said. "Thousands of families have now fled their homes as a result of the fighting and air strikes," the UN humanitarian coordinator for Yemen, Johannes Van Der Klaauw, said in a statement. "Ordinary families are struggling to access health care, water, food and fuel – basic requirements for their survival." The fighting had destroyed, damaged or disrupted at least five hospitals, 15 schools, Yemen's three main airports, two bridges, two factories and four mosques, as well as markets, power stations and water and sanitation facilities, OCHA said. Public water services were on the verge of collapse and hospitals were overwhelmed with casualties. The United nations appealed for $274 million to meet Yemen's humanitarian needs over the next three months. UN Secretary-General Ban Ki-moon called for an immediate halt to the fighting on Thursday. But his special envoy to Yemen, Jamal Benomar, quit after his plan to halt the war failed. In other developments, military units protecting the Masila oil fields, Yemen's largest, withdrew on Friday and handed over security to armed local tribes, the tribesmen and oil company employees told Reuters. Companies that run the fields include state-owned PetroMasila, Canada's Nexen Energy and France's Total. The oil industry is watching the conflict with concern as Yemen lies on shipping lanes and the narrow Bab el-Mandeb passage, through which nearly 4 million barrels of oil are shipped daily to international markets. The conflict also has wider strategic dimensions. The United States has poured aid and personnel into Yemen in recent years as part of its war on Islamist militants but its military teams evacuated last month. - Reuters