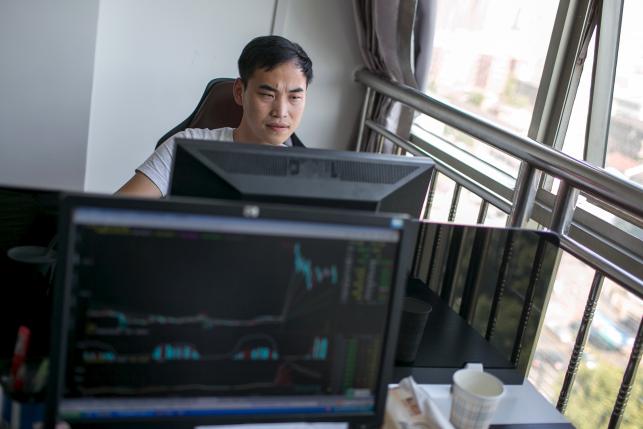 SHANGHAI - A decade ago Zhang Xiongjie was a teenage infantryman patrolling China's bleak border with North Korea. Now he stays in swanky hotels and drives a Mercedes Benz CLS - a remarkable rags-to-riches journey achieved in part by dominating one of the most obscure corners of China's unruly financial markets: egg futures. The story of how he earned so much money, so fast - 600 million yuan (61.85 million pounds), he says, in 2014 - highlights the casino-like nature of China's nascent futures markets, and the vulnerability of such markets to a destabilising rout. Zhang trades on his own account and Reuters was not able to independently verify his earnings. "Us poor people, when we are born, we're impoverished and uncultured. If we have such opportunity, why would we not take it?" said the smiling, soft-spoken 27-year-old in an interview. The opportunity Zhang saw was very specific: to borrow a lot of money quickly to produce high profits in a poorly understood market. "The leverage is high in futures," Zhang said, who is spoken of as a celebrity by other Chinese traders. "You can make a fortune overnight." But the high concentration of leveraged retail investors chasing overnight fortunes is a growing concern for China's regulators after recent turmoil in the country's stock market. The speed of a stocks slide that began in mid-June was exacerbated by the snowball effect of investors who had used borrowed funds to buy shares being forced to sell to meet margin calls. Zhang, whose trading now ranges well beyond egg futures, himself has already experienced massive busts, saying he lost as much as 400 million yuan in two days on bad calls last year. BACK TO THE FUTURES Beijing has flitted back and forth between allowing futures - a financial instrument obliging the purchase of an asset at a certain date - the space to grow, and reining in excesses. In 1998, China closed 14 futures exchanges, citing "illegal engagement in overseas futures," "market manipulation" and "poor regulation," as reasons, according to an official government website. But in a bid to open up its markets, China plans to allow trading in more asset classes, aiming to launch crude oil futures around September. It was Beijing's decision to launch the egg futures market in November 2013 that allowed Zhang, from a poor family in the southeasten port city of Ningbo, to earn his reputation as the trader who dominated the exchange last year. "If I let it fall, it fell, if I wanted it to rise, it rose," said Zhang, who at the time worked in a specialist consultancy in Wuhan, which collected daily information from across the country on eggs. Many agricultural commodities trade on futures markets, which developed to allow farmers to hedge against fluctuating prices, although China is currently the only country that trades egg futures, according to the Dalian Commodity Exchange. Last year, the volume of egg futures traded increased 1,703.3 percent from 2013, making it the 9th largest futures market in the world by volume, according to figures from the Futures Industry Association. At its peak last year, 1.5 million metric tones of eggs were traded in one day according to the Dalian Commodities Exchange. Now though, Zhang has outgrown egg futures, saying he has made - and lost - more money playing other markets. "I only made 30 million yuan from eggs, now I lose that much in just one day," he said, adding that he now trades in steel rebar and iron ore futures, again using leverage. Just like China's stock markets, the country's futures exchanges are dominated by retail investors, who are more flighty and likely to borrow from shadow lenders which demand high levels of interest. In 2013, individual investors made up 97.4 percent of trading accounts in the futures markets, according to data from the official China Futures Association, and around 97 percent of the country's bourse according to data from the securities regulator. Although a minimum initial sum of 500,000 yuan is needed to buy equity futures, there are many asset markets where the initial outlay can be as little as 3,000 yuan - and the market is expanding. Total volume in 2014 increased by around 10 percent on-year, according to data from China Futures Association. "In theory, risks are higher for futures than for stocks ... principally because investors' access to leverage is too free," said Jiahe Chen, chief economist at Cinda Securities. "So taking a non-rational investment approach is more commonplace." For Zhang, who patrolled the North Korean border for two years earning 1,000 yuan a month as a Chinese soldier to get a place in university, the ease of access to leverage in the futures market means he can dream big. "The goal is to have the hedge fund with the highest return in the world, with capital of around 100 billion yuan," he said. -Reuters