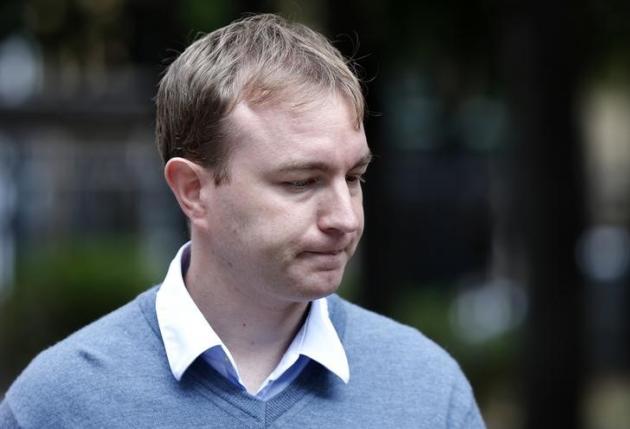 LONDON - Ex-trader Tom Hayes was sentenced to 14 years in jail by a London court on Monday after being found guilty of conspiring to rig Libor benchmark interest rates following a seven-year global investigation. After a nine-week trial and seven days of deliberations, the jury of five women and seven men found Hayes, a 35-year-old former UBS (UBSG.VX) and Citigroup (C.N) trader, guilty of all eight counts of conspiracy to defraud. In the first trial of a defendant accused of Libor rigging, Hayes had faced up to 10 years imprisonment for each count of conspiracy over the manipulation of London interbank offered rate (Libor), a crucial benchmark for around $450 trillion (£288.3 trillion) of financial contracts and consumer loans, between 2006 and 2010. The London trial, which kicked off on May 26, marked a new phase in the inquiry that has led to 21 people being charged and some of the world's most powerful banks and brokerages paying around $9 billion in regulatory settlements. Justice Jeremy Cooke said a message had to be sent to the world about dishonest conduct in financial services. “Probity and honesty are essential as is trust ... The Libor activities of which you took part puts all that in jeopardy." Hayes, who sat impassively as he received the verdict, had asked to say goodbye to his wife Sarah before entering the dock. They shared a brief kiss before he was locked in the dock to hear his sentence. After Hayes left the dock his wife told Reuters the sentence was “horrific” as she made her way out of the courtroom. The Serious Fraud Office (SFO) had alleged Hayes set up a network of brokers and traders spanning 10 leading financial institutions and cajoled or bribed them to help rig for profit rates designed to reflect the cost of inter-bank borrowing. Stephen Rosen, partner and head of the financial disputes team at London law firm Collyer Bristow, said the outcome was significant for the SFO. "This is a success for the Serious Fraud Office, which has put immense resources into pursuing this ground-breaking prosecution, seen as a test case to determine whether it can prosecute other allegedly dishonest Libor traders," Rosen told Reuters. "It is now more likely to do so.” RED FLAGS The prosecution had said Hayes simply ignored "red flags" as a global investigation into Libor rigging allegations, instigated by U.S. regulators at the height of the credit crisis in 2008, gathered momentum in 2009 and 2010. Hayes, who has been diagnosed with mild Asperger's Syndrome, said during his trial he had been transparent about trying to influence rates and that his managers were aware of and condoned trading methods that were common industry practise. He said he received no training, that Libor was at the time unregulated, his requests for rate levels fell within a "permissible" range and that he left a trail of emails and computer chats because he didn't think he was doing anything wrong. "(I was) either the stupidest fraudster ever because I wrote everything down, or there was an element of me that genuinely didn't think about it," Hayes has said in documents shown to the court. "I might be a lot of things, but I'm not stupid." Although the court had been shown evidence that Libor manipulation was prevalent at UBS before Hayes arrival in 2006, Cooke said Hayes had developed the practices using interdealer brokers, external traders and rate submitters. Hayes’ counsel Neil Hawes said the conduct Hayes had been convicted for had been prevalent for at least five years before he arrived at UBS. Citigroup and UBS both declined to comment on the verdict. Hayes was given 9-1/2 years in jail for counts related to his time at UBS and a total 4-1/2 years for various counts at his time at Citi. The two sentences are due to run concurrently. During 82 hours of interviews with SFO investigators in the months following his arrest in December 2012, Hayes admitted dishonesty. But he told the court he had only confessed because he was desperate to be charged in Britain to avoid extradition to the United States, where he also faces fraud-related charges. Hayes subsequently withdrew from a cooperation agreement with the SFO and pleaded not guilty in December 2013. -Reuters