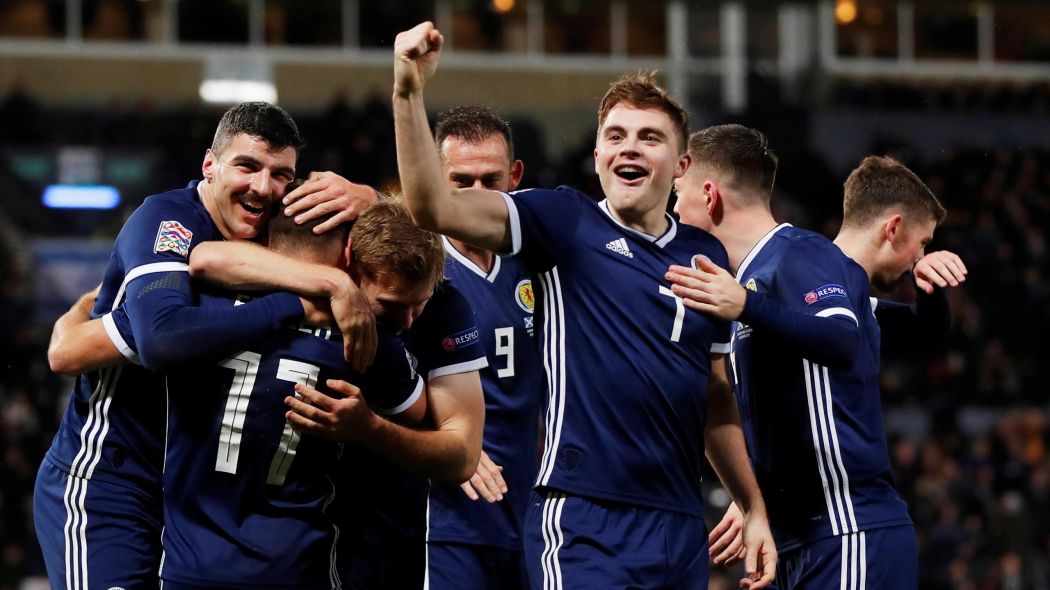 BELGRADE (Reuters) - A superb hat-trick by Scotland midfielder James Forrest earned them a 3-2 home win over Israel in the Nations League and promotion to the competition’s second tier on Tuesday. The result, which also sealed Scotland’s Euro 2020 playoff berth if they fail to qualify automatically, left them top of Group 1 in League C on nine points from four games, three ahead of Israel and six in front of Albania. Serbia also sealed their passage to League B with a 4-1 home win over Lithuania which clinched Group 4 with 14 points from six games, two more than Romania who won 1-0 in Montenegro. Scotland fell behind to a sumptuous 25-metre strike by Israel’s Brighton & Hove Albion forward Beram Kayal before Forrest, who scored twice in Saturday’s 4-0 win at Albania, turned the match on its head with some clinical finishing. The Celtic winger equalised in the 34th minute when he drilled home a rebound from 12 metres after Andy Robertson’s shot was blocked and fired the Scots ahead two minutes before halftime with a fine effort from inside the penalty area. Ryan Fraser, who set up the second goal, turned provider again in the 64th minute as Forrest took a low pass in his stride, beat a defender and calmly side-footed the ball past Israel goalkeeper Ariel Harush. Scotland were forced to hang on in the closing stages after Eran Zahavi pulled one back for the visitors with a thumping low shot from 20 metres and the home team’s keeper Allan McGregor did well to keep out a fierce Tomer Hemed shot in the dying minutes. “It’s a great night,” Scotland’s hat-trick hero Forrest told Sky Sports. “It showed a lot of character that we kept going and we managed to get the goals. “You need to be contributing either goals or assists and I’m delighted with the last couple of games to be doing that.” Forrest has now scored five goals in his last two games for Scotland, after failing to score in any of his previous 24 appearances. He is the first Scotland player to net a hat-trick since Robert Snodgrass in September 2016 against Malta. Serbia took a 2-0 lead over Lithuania when an Arturas Zulpa own goal and an Aleksandar Mitrovic header put them in command after a goalless first half. Lithuania, however, reduced the arrears through Deimantas Petravicius. Substitute Aleksandar Prijovic headed in Serbia’s third before Adem Ljajic rounded off a swift break to wrap up Serbia’s win on a chilly night at Partizan stadium. Scotland and Serbia joined Norway and Finland, who had already sealed their passage to League B.