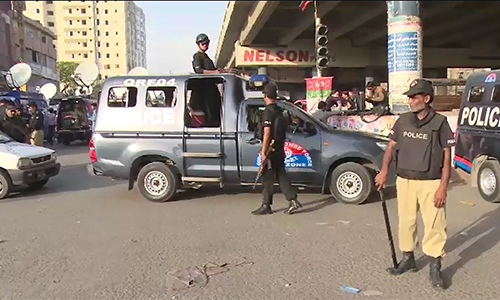 KARACHI (92 News) – Six people, including four policemen, were murdered during the last 12 hours in Karachi on Wednesday. Five policemen were taking meal in a hotel in Korangi area when terrorists opened fire at them. As a result, ASI Aqeel, Constables Anwaar, Akhtar and Jamil died on the spot. Razakar Asif was injured and taken to hospital. A heavy contingent of police reached the spot. The IGP Sindh said that they were investigating the incident from different angles. DIG East Munir Sheikh said that three attackers were riding a motorcycle. He said that the martyred policemen were wearing bullet proof jackets and had modern weapons as well. Two people were murdered in different incidents. Meanwhile, a terrorist was killed in an exchange of fire with the Rangers during an operation in Lyari’s Mohallah Ali Muhammad.