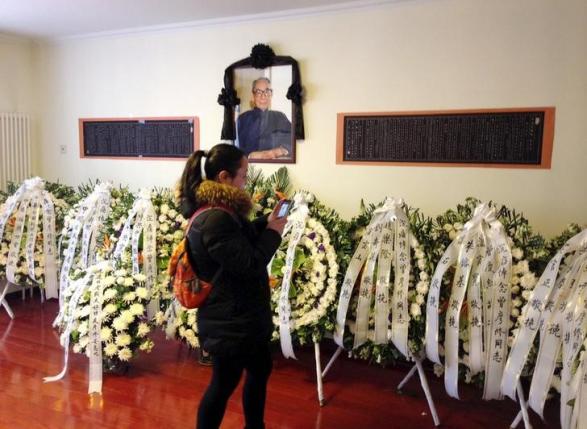 BEIJING - Chinese President Xi Jinping's attendance at the funeral earlier this year of a one-time propaganda minister was a surprise; Deng Liqun, who died aged 99, was never a top-ranked official and had been a political enemy of Xi's father. Xi's presence, sources said, was in fact part of a nascent effort to heal wounds across China's ideological divide after his unrelenting crackdown on corruption alienated senior officials from the ruling Communist Party, government and military. Xi wants to consolidate support ahead of the 19th party congress in 2017, when the seven-member Politburo Standing Committee, the apex of power in China, is reshuffled, said the sources, who have close ties to the leadership. While Xi is expected to rule until 2023, he needs to get allies on the committee who will back his three-year war on corruption and his plans for reforming China's slowing economy, experts said. Xi has been involved in a number of funerals this year for ex-officials who spanned China's political spectrum. Funerals of notable figures have a unique place in Chinese politics and are carefully choreographed by the party. Attendance is often scrutinised for clues as to whether retired officials are among the mourners, indicating they still have clout. Xi's bridge-building shows a different, more nuanced side of a president who appears to the outside world as China's most top-down ruler since Mao Zedong. The Chinese leader's anti-graft campaign has netted scores of senior officials, targeted influential families and frightened a bureaucracy to the point where some officials won't make decisions for fear of drawing attention to themselves. It has also traumatised political factions. FATHER'S NEMESIS That's why Xi was among the mourners at Deng's funeral in Beijing on Feb. 17, where he bowed three times before the body of the ultra-conservative Marxist ideologue, sources said. Xi had no obligation to go, the sources added, requesting anonymity because they were not authorised to speak to foreign media. Deng had also been a nemesis of Xi's late father, Xi Zhongxun, a vice premier in the late 1950s and early 1960s. "Deng Liqun was a leftist and Xi Zhongxun a rightist. They were political enemies since ... the 1950s," one source said. In China, leftists are opposed to market-oriented reforms and Western-style democracy, while rightists are more liberal-minded. Precisely where President Xi sits is fluid, which is how he wants it, experts say. "Xi went because he needs leftists in his fight against corruption," the source said. Experts believe that, in a worst-case scenario, conservatives could try to oust Xi, especially if the economy falters further and unemployment sky-rockets. The president has walked a tightrope targeting "tigers", or senior figures, in his corruption crackdown. Among them has been former security tsar Zhou Yongkang, a conservative heavyweight jailed for life in June. Despite that balancing act and China's plunging stock markets, Xi is sure to display confidence when he holds talks with U.S. President Barack Obama in Washington this week and give little ground on issues that bedevil ties, from cyber security to China's territorial ambitions. "HE'S THEIR GUY" Xi has also paid tribute to those on China's political right. Zeng Yanxiu, the first party member purged in the 1957 Anti-Rightist movement against liberal intellectuals, died in Beijing on March 3, according to sources close to the family. He was 96. The party banned the holding of a public service because Zeng's death coincided with the annual full session of parliament, the sources said. Neither Xi nor his father were close to Zeng, but the president sent a wreath, they added. "Xi has been courting both the left and the right in the party," a second source with leadership ties said. "Xi is a pragmatist, neither a rabid conservative nor excessive liberal." In the living room of Zeng's flat at the time, a Reuters reporter saw visitors bow before a portrait of Zeng, flanked by wreaths from Xi and other leaders. "Xi draws strength from convincing both sides of the ideological divide that he's their guy," said Christopher Johnson, a China expert at the Center for Strategic and International Studies in Washington, referring to Xi's focus on funerals. Another notable funeral Xi attended was for Qiao Shi, 90, a former chairman of parliament and once head of the party's anti-corruption watchdog who was a proponent of strengthening the legal system. Qiao died in Beijing on June 14. DISQUIET IN THE RANKS Xi also went to the funeral of General Zhang Zhen, former vice chairman of the powerful Central Military Commission, who died in Beijing on Sept. 3 aged 100. Anti-graft investigators have focused particular attention on the military, causing much disquiet throughout the ranks, sources have said. While Xi appears to have attended no public weddings since assuming power, his own showed his penchant for keeping his cards close to his chest. Xi, then 34, and his wife, Peng Liyuan, then 24 and a popular army singer, exchanged vows in a simple ceremony at Xi's home in the southeastern port city of Xiamen in 1987 where he was a vice mayor, official media reported last year. Xi then informed the mayor, who invited colleagues to a dinner. The first to arrive recognised Peng and asked, while shaking Xi's, hand: "Why is she here?" Xi replied: "She is my wife", official media said. -Reuters