Seven die as van turns turtle on Expressway near Murree 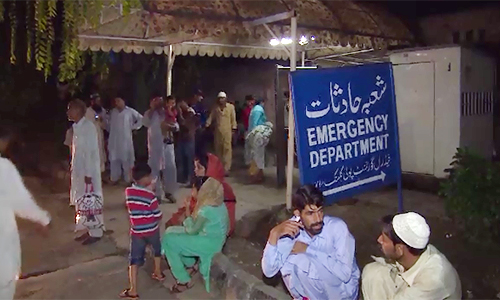 Seven die as van turns turtle on Expressway near Murree

MURREE (92 News) – Seven people died while nine were seriously injured when a van turned turtle on Expressway near Murree on Saturday. The doomed van was coming to Rawalpindi from Muzaffarabad when it turned turtle due to overspending. As a result, six people, including a woman and a one-year-old girl died. Later, one of the injured died in hospital. The deceased included Ali Afsar Abbasi, Absar, Yasir Chaudhry and Shahla. The injured were shifted to different hospitals. In another accident, four people were killed when a bus collided with a car in Murree’s Galyat area. Muzammal, a resident of Lahore, was shifted to Tehsil Headquarters Hospital where he died due to lack of facilities. His relatives staged a demonstration by placing the body at GPO Chowk, suspending traffic on the Mall Road.