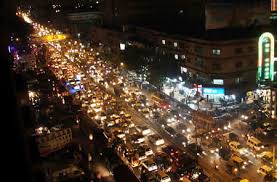 KARACHI (92 News) - Four policemen were killed and one injured when two police mobiles came under separate attacks by terrorists near Gul Plaza shopping centre on MA Jinnah Road and Pakistan Chowk on Tuesday. In the first incident, unidentified armed assailants opened fire at the cops when they were having tea while on area patrol. ASI Riasat and Constable Saeed were killed on the spot while Jahanzeb was seriously injured. The terrorists targeted policemen near the lighthouse. In another incident of terrorists targeting policemen, Head Constable Shakeel was killed near Pakistan Chowk, within the remits of Arambagh Police Station. Constable Mujahid was shifted to Civil Hospital where he succumbed to serious injuries. Additional IG Sindh Ghulam Qadir Thebo said the firing incidents were a reaction from terrorists against police operation.