GUJRANWALA (92 News) – At least four Pakistan Muslim League-Nawaz (PML-N) and Pakistan Tehreek-e-Insaf activists injured in a clash during PP-100 by-polls in Dargahpur and Muslim Gunj on Sunday. By-election for provincial assembly seat (PP-100) is underway in Gujranwala district’s Kamoki area as a close contest expected between PML-N candidate Akhtar Ali and PTI’s Ahsanullah Virk. Torrential rains marred the polling process with polling starting in several stations after a delay of half hour to an hour, while polling staff could not reach on time at several polling stations. Residents faced problems in reaching polling stations in several areas of the constituency due to heavy rain. As many as 113 polling stations have been set up for 162,444 registered voters. Heavy contingent of law-enforcement personnels have been deployed to ensure security during the polling as 55 polling stations declared sensitive. Counting of the votes in the by-elections began after polling in PP-100 ended. 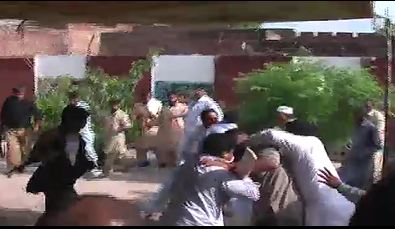