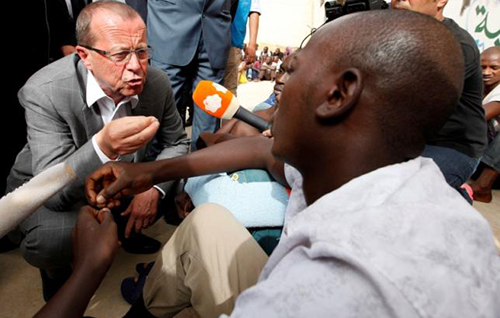 BENGHAZI – Fourteen unidentified bodies with shot wounds to the head have been found in the eastern Libyan city of Benghazi, a hospital official said on Friday. UN Libya envoy Martin Kobler said he was "shocked and dismayed by the summary execution," labeling it a war crime and calling for those responsible to be brought to justice. The bodies were recovered from Laithi, a neighborhood that forces loyal to eastern commander Khalifa Haftar captured this year from a loose alliance of Islamists and other opponents. Military officials from Haftar's forces refused to comment, saying the incident was under investigation. Benghazi has seen some of the heaviest violence of the sporadic conflict that developed after Libyan leader Muammar Gaddafi was toppled in an uprising in 2011. Haftar has been waging a military campaign there for the past two years against a coalition of armed groups called the Shura Council of Benghazi Revolutionaries. His forces have advanced in several areas in recent months, but have not gained full control over the city. Campaign group Amnesty International said on Thursday that air strikes by Haftar's forces were endangering the lives of scores of detainees being held captive in Benghazi. Amnesty said it appeared that the Shura Council may be using the captives as human shields, which can constitute a war crime. It said the captives were likely being held in the district of Ganfouda, where Haftar's forces have recently dropped leaflets urging civilians to leave. –REUTERS