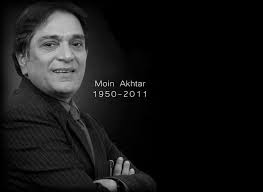 KARACHI (92 News) - The fourth death anniversary of legendary and versatile actor Moin Akhtar was observed on Wednesday. Born on December 24, 1950, the legendary actor entered the entertainment world while in his teens in 1966 as a stand-up comedian. Moin could speak fluently different languages including English, Bengali, Sindhi, Punjabi, Memon, Pashto, Gujarati and Urdu. Moin Akhtar rose to the national spotlight and gathered critical acclaim for his performance in the drama Rozi, in which he played the role of a female TV artist. Also, in a talk-show namely Loose Talk, which began in 2005, he appeared as a different character in each and every of over 400 episodes interviewed by Anwar Maqsood, the writer and the host of the program. He was also acclaimed for his versatility in Eid Train, Family 93, Half Plate and Sach Much among many other television plays. Moin also won Pride of Performance and Sitara-e-Imtiaz besides many other awards. He died on April 22, 2011 following a cardiac arrest and was laid to rest at Model Colony graveyard in Karachi.