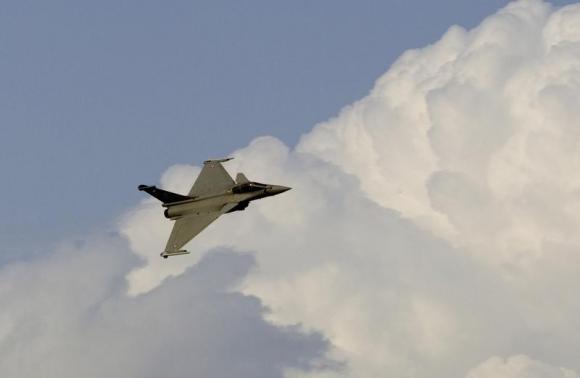 (Reuters) - France is in advanced talks to sell Dassault Aviation-built Rafale fighter jets to Egypt for around 6 billion euros ($6.88 billion), Les Echos newspaper reported on Thursday. Despite exclusive negotiations with India for the last three years, Dassault has still not found a foreign buyer for its multi-role jet, the Rafale, billed to be one of the most effective and sophisticated fighter jets in the world, but also one of the most expensive. The business daily said the two countries were close to finalizing a deal for 24 jets and a naval frigate worth 5 to 6 billion euros. The deal could be financed by as much as 50 percent through a credit facility arranged by French credit insurer Coface. A spokesman for Dassault declined to comment. Paris and Cairo have enjoyed close economic ties in the past but turmoil in the north African state since president Hosni Mubarak was overthrown in 2011 left Western governments wary of signing contracts, especially in the defense sector. With the recent rise to power of President Abdel Fattah al-Sisi, ties have improved and both sides are concerned by the rise of jihadist groups in Libya and Egypt. France secured its first major military contract in Egypt in about 20 years in 2014 with a 1 billion-euro ($1.35 billion) deal to sell four naval frigates. Senior French officials have repeatedly traveled to Egypt over the last year and Sisi in November undertook a state visit to Paris, where discussions were held about replacing Egypt's fleet of 18 Dassault-made Mirage jets. Egypt was the first foreign buyer of the Mirage in 1981. Dassault is under increasing pressure to sell the jet overseas. The French government said last year it would slow the pace at which it takes delivery of Rafale jets, taking just 26 over the next five years instead of 11 a year. A French delegation in January visited New Delhi to salvage an agreement to supply 126 Rafale fighters to the Indian Air Force which has hit a snag over the local assembly of the planes.